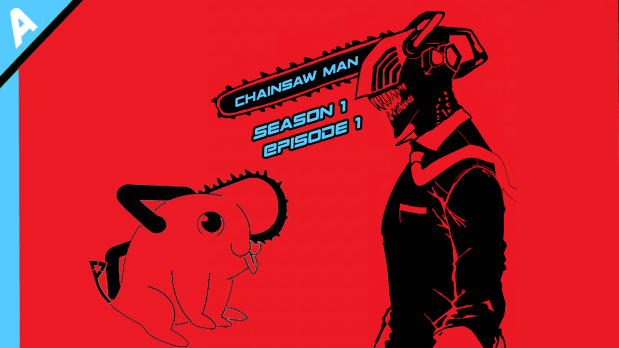 First off the art style is fire!

Note that we did read the manga

We open the show up with someone walking and breathing really heavily, sounding like they were jerking off. Now this is Denji, our main character having a dream. He will mention this dream a few more times within this season and the only reason we know that is because we read the manga.  As he wakes up he heads to “work”. ON his way there We learn that he has sold his kidney, an eye, and one of his testicles. He has done all this to try and lessen the debt he is in with the Yakuzya.  To also help he cuts down trees with Pochita and kills devils. They are usually worth about 300k here is where we see the first devil of the show, the tomato devil. (I know some of these names sound really corny) but they do look cool, with a real Junji Ito feel to them. 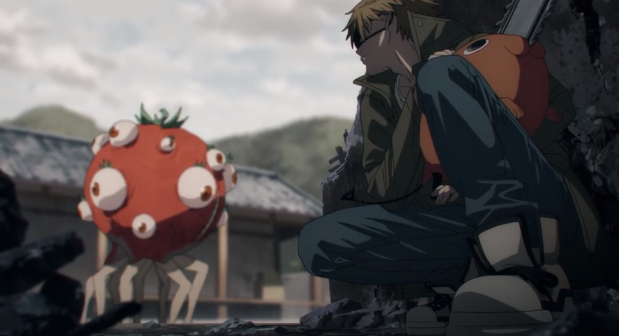 Intro song is decent, could have been a little better.  Will surely grow on me as the season goes.

After the intro it opens to Denji pulling Pochitas saw out of the devil he has defeated it. The leader of the yakuza comes up and is like good work that’s gonna get you about 400k this makes Denji light up! Then the yakuza guy says after that you owe and the interest that leaves you with 170k then after the finders fees and admin fees management cost and so on you are left with 70k.  ON his walk home from work he is thinking about the money and realizes that after all his other personal bills he will be left with roughly 1,800 yen That will have to last him for a month.  So he is extremely poor, obviously because he is in that much debt. We slightly get to learn right here that it is not his own debt that he is trying to pay off but his dads they will get more into detail on that later.  We see just how hard up for money he is as one of the yakuza offers him 100 yen to eat a lit cigarette and he does put it in his mouth. 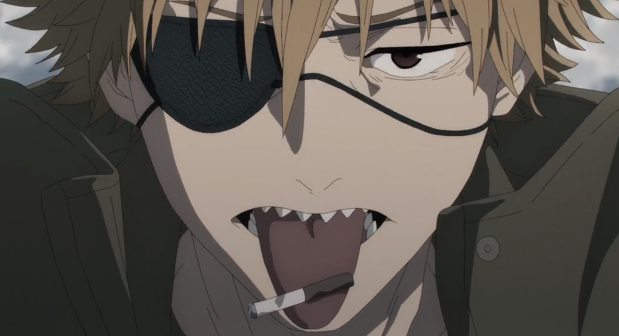 Back at his place he and Pochita are in his shack eating a dry piece of bread and he is telling Pochita about how he heard people put jam on bread before eating it. Further helping us understand just how poor he is.  He even says normal life is just a dream for us. He says that if there was one dream that he could have come true it would be to score with a girl before he died.

Here we get a flash back that will help us understand how he got into the situation with the yakuza.(He is young here)  He is at his dad’s grave site, and there is a car besides him. Apparently his dad hung himself before paying what he had owed for the month. They tell Denji that he has until tomorrow to put together 700k. Or they will cut him up and sell the bits. It’s then that they drive off and Denji hears the sound of a little motor running, he looks to the side and sees Pochita coming towards him. He goes a devil? If you are going to kill me just do it, I’m gonna die tomorrow anyways. But he notices that Pochita is also hurt, bleeding from its side. He offers Pochita to bite him and drink some of his blood, seeing as that’s how devils can heal themselves. So it bites him and heals up, Denji says to it this blood isn’t free this is a deal, I help you and you help me. And that’s how their bond was formed. 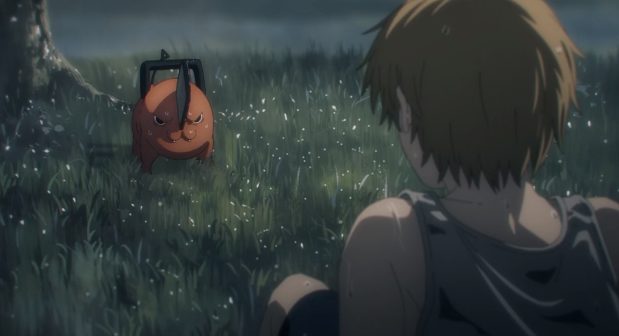 We see a small devil get splattered onto the ground, it’s Denji showing this to the Yakuzya and he says hire me as a devil hunter! 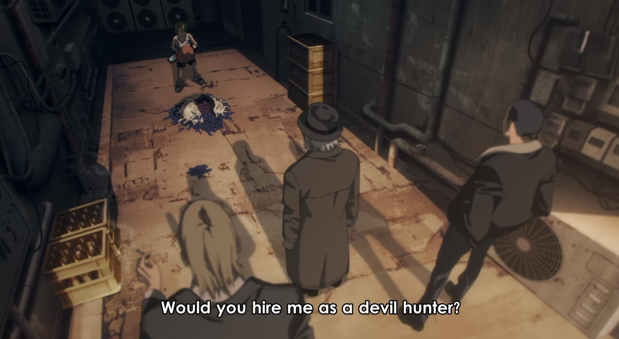 Cut back to present day and he is awake, can’t sleep because he is too hungry.  He tells Pochita about his dreams of wanting to eat good food and flirt with girls. Then he coughs and some blood comes out his mouth, he tells Pochita that his mom apparently died from a heart disease that made her cough up blood also. There is a knock at the door, it’s the Yakuzya.  They say there is another devil they need him to kill and it’s time for work. 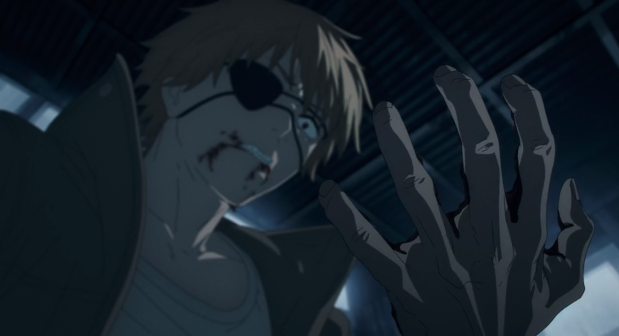 They take him to a sketchy ass warehouse, Once inside Denji is asking questions about the devil asking if it was hiding because he didn’t see it. The Yakuza leader starts talking and says they are grateful to him, and appreciate how loyal he is almost like a dog, but then he says that he hates the stench of dogs.  Then BOOM we see a sword going through Denji and Pochita!!! Someone has stabbed them from behind. The leader turns to Denji and says that even the Yakuzya thinks about getting bigger and making more money. We learn that they have made a deal with the Zombie devil! This particular devil wants devil hunters dead so that explains why they stabbed Denji. The power granted to the Yakuza seems like a shitty deal however because it will wind up turning them into zombies. 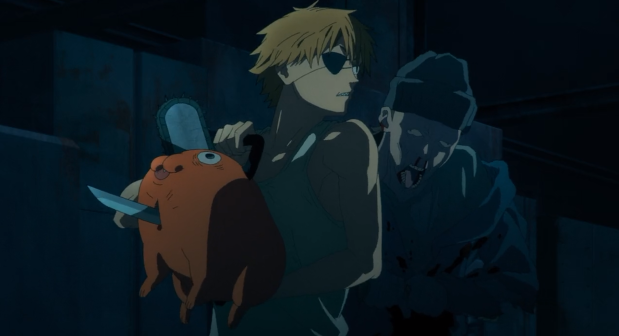 Denji tries to escape but it is no good. They wind up catching him and cutting him into pieces and throwing him into the trash.

Inside the dumpster we see Denji in pieces and Pochita on the side of him both dead. By some miracle a bit of Denjis blood drips from his mouth and into Pochitas, reviving him! Pochita walks up and has a flashback, remembering that Denji told him that if anything were to ever happen to him If Pochita was capable of doing so he wanted him to take over his body, that way he could live out a normal life. He says then make my dreams come true! 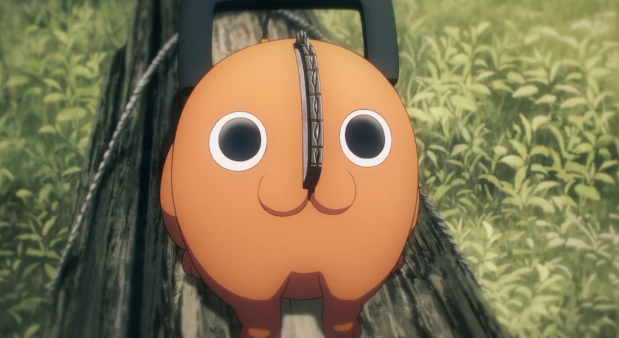 We go back to the dumpster and see Denjis body slowly regenerating thanks to the help of Pochita, He wakens and him and Pochita have a moment, Pochita says I’ve always loved hearing you talk about your dreams, so here is the deal I will give you my heart but in exchange I want you to show me your dream! (I wonder if he is talking about the hooking up with a girl dream lol)

Denji comes out of the dumpster to realize that he isn’t hurt but then notices Pochitas tail sticking out of his chest.  This was a sad moment. Once he steps out the dumpster the Zombie devil is in shock and orders all the yakuza after him. He pulls the tail on his chest but all the zombies get on top of him just a bit too fast.  As they are eating we hear a motor and out pops the Chainsaw Man! He goes wild cutting everyone into pieces. Including the zombie devil. 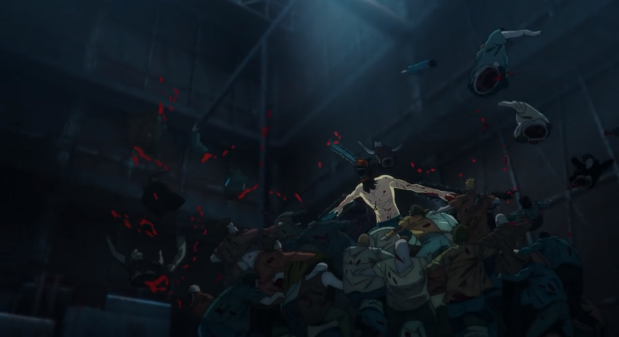 After this absolute bloodbath we see another car drive up to the warehouse. Three people walk in and say someone got here before us.  They see the Chainsaw Man towards the back, the lady walks to him. She says you have a strange smell, not like a human or a devil.  He lifts his head and says hug me…  He starts to fall over, she catches him and does hug him strangely enough.. HIs Chainsaw head and arms melt off. She says he’s human. She tells him that she is a devil hunter with public safety. There are two options presented to him: either Get killed like a devil orrr She will keep him as a human, feed him and make sure he is taken care of. Obviously the thought of food entices him, he says so what’s for breakfast. She lists off a bunch of foods.  He is like That sounds awesome! 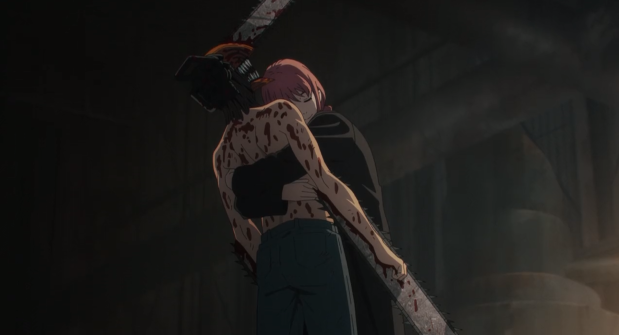 First outro song was pretty good 8/10 on that

POCHITA IS WAY TOO DAMN CUTE

Should be fixed now.

REV THAT BARKING CUZ CHAINSAW MAN IS HERE, the opening is a banger, the animation is top knotch. peak is here… Ive already read the manga and let me just tell u that yall are NOT ready for this ride. But ur already here so LETS GOOOOO (woof woof).