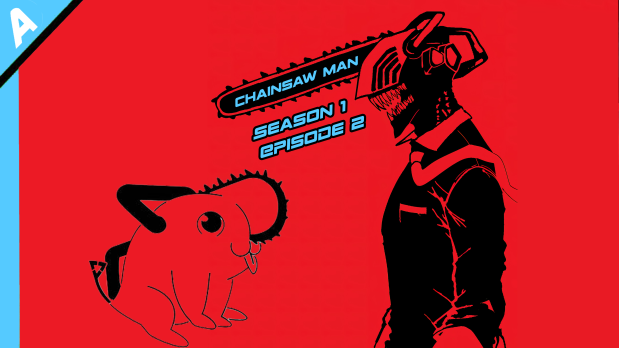 Episode opens up with Denji and Makima (you as the viewer will learn her name later in the show) riding in a car.  They are on their way to Tokyo (we know this because the title of the episode is Arrival in Tokyo.  And here inside the car we can start to notice some of the slight differences from the manga and this show.

During the ride we hear Denjis stomach growl multiple times, it seems like they just took him from that warehouse and hit the road right away. Makima tells him that he is in her care from now on and that she expects a yes or a woof for answers, she does not need a dog that says no. To himself he says i thought she was nice, I kind of liked her, I had no idea she was scary like this.

But that will quickly change as she offers to pay for his food upon his stomach growling for a second time now.  She even gives him her coat because he was still in just his shorts from after the battle. This gets him thinking how no one has ever been nice to him ever in his life, much less a girl that was that pretty. Then he blasts the L word (in his mind of course.) 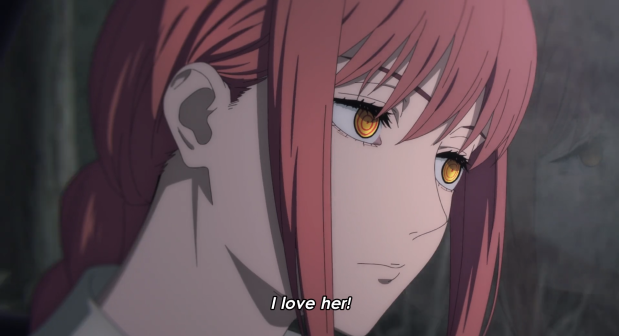 After the intro we see them at a shop ordering food. Denji is weak from the fight and starts to pass out; he falls over and his head winds up smacking right into Makimas boob.  I will say that Boobs were a major focus on this episode and if that isn’t enough in itself to rate this episode high then I don’t know what is. We learn that the chainsaws cut him up when he transforms so the loss of blood from that can make him weak. Makima asks how he wound up like this and he explains the situation with him and Pochita , she tells him that there is not a lot of precedent for this condition meaning it is super rare. The condition is so rare in fact that it does not even have a name.  Makima then says that she does believe him because she has a great sense of smell and says that his friend meaning Pochita is alive inside of him. Like actually alive so she could smell both human and devil scent on him. This obviously excites Denji to learn that Pochita is indeed not dead but just inside of him. Then he passes out again.  . He wakes up and they have a moment with the food that they ordered, Makima winds up feeding him and right here finally tells him her name.  He asks her if there is a type of guy that she likes, and she says I’m into the Denji type.   He freaks out and goes DUDE! That’s me! 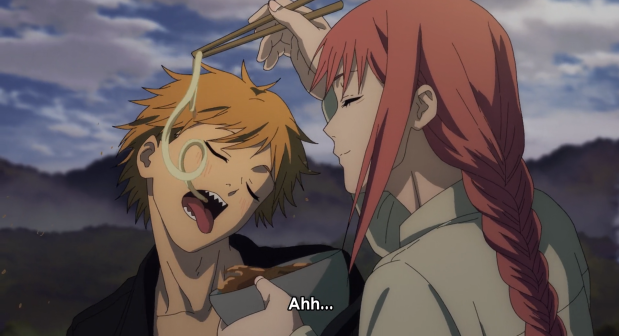 They get to the devil hunters headquarters. She tells him some brief facts about how there are over 1000 devil hunters in Tokyo, including civilians. Hse even mentions public safety here which is where Denji will wind up working. Once they get inside the elevator he starts thinking about Makima and thinks that maybe they will wind up working together  and then hopefully “get together” All this is brought about because she said she was into the Denji type.

Inside of her office she gives Denji a uniform and introduces him to Aki, Denji will be shadowing him for the day Aki grabs the back of Denjis shirt and says you aren’t even in her league then drags him off.  They really don’t get along at first. Denji falls to the floor and he is still down there bitching about how he wants to work with Makima. She walks over and bends down, she ties his tie and says if you do a good job we can wind up working together someday. 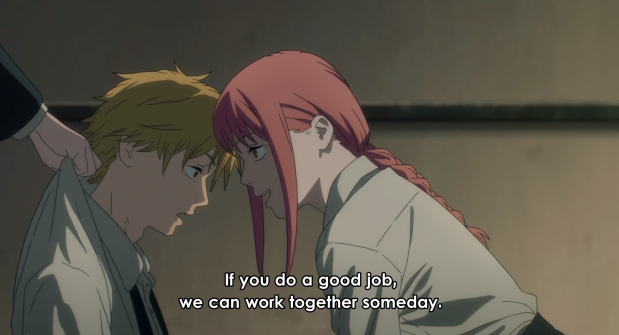 Out on patrol Denji is asking Aki questions about Makima , He is obviously annoyed by this.  He tells Denji to follow him, they get down an alleyway and Aki beats the shit out of Denji.  He tells him how people who take this job without thinking it through always wind up dead and he should just leave now. He realizes that Denji just took the job because he is after Makima, Denji confirms this by going Ding Dong as he is all bloodies and laying on top of some trash bags.  Aki flicks his cigarette onto Denji and then spits on it to put it out. 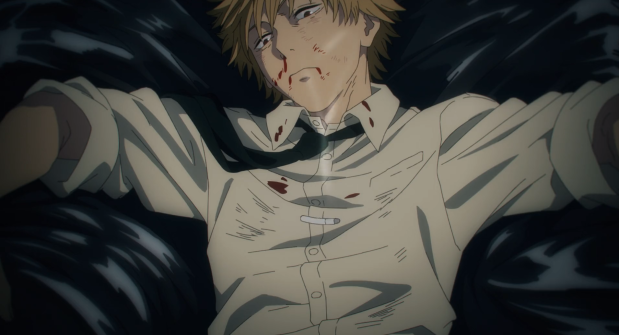 He says I’ll let her know that you ran off, scared away by the devils and then goes to walk away. Next thing you know Denji gets up, runs towards him and kicks him square in the nuts. Denji kicks him in the nuts 4 or 5 more times saying when i fight a dude its nuts or nothing. As Aki is down, Denji explains that he had good food for the first time ever in his life and someone even paid for it. Sure he didn’t think this job through when he took it but if he gets to keep this kind of life he really doesn’t care if it kills him.

Aki gets up and they wind up having a pretty big fight here. Aki is saying how Makima is not the kind of woman someone like Denji should be chasing and Denji says sounds to me like you also like her. Which if you noticed when Makima was tying his tie earlier in the episode Aki does look back and slightly scoff at it. The fight is won by Denmji with one final kick to Akis balls. 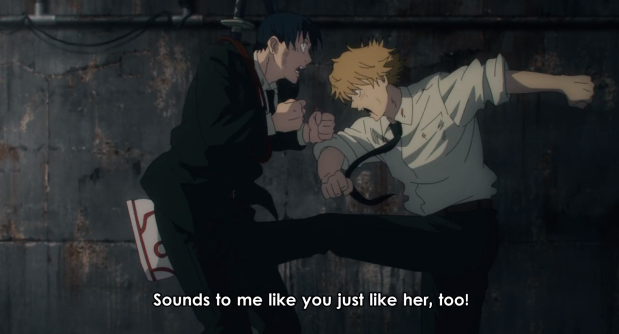 They get back to the office and Denji is holding Aki up and says to Makima his nuts were attacked by the nut devil! Aki tries to rat him out. Makima says so you think you two can work together? They both say no but Makima is not having it she says glad you two are getting along. She then explains that Denji is going to be joining Akis’ unit. Aki is not happy about this but Makima reminds him that his team is an experimental one so it does not operate normally. She says then that if Denji tries to quit or not follow the rules they will put him down as a devil. Makima then says to Denji that they are working together until the day he dies.  He sort of got Bamboozled there.

After the office they are walking home and Denji ask Aki if Makima is a good person we find out here that she saved Akis life but that is all he says on the matter I’m sure we will find out more on that later.  They get to a crosswalk and Denji goes Ahh Makima. I hope I get to hug her again and Aki freaks out, furthering our suspicions that he does like Makima. 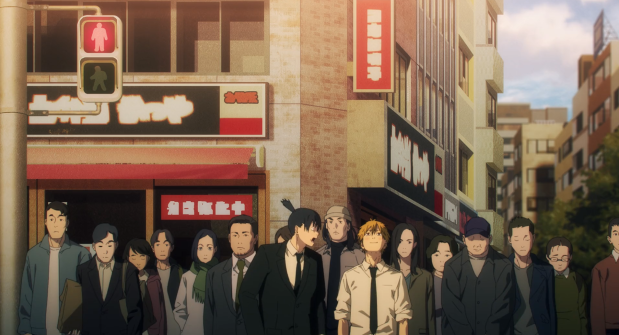 We learn that Denji will be living with Aki so he can keep an eye on him and Denji really isn’t the best roommate, eating all of Akis bread and jams, using all the toilet paper and not replacing it and taking baths for a very long time.

The next day they get to a job site to take care of a fiend.  Denji asks what a fiend is and Aki says did you never go to school to which the reply is no. (I think this will be an important piece of the story later)  Aki explains that a Fiend is when a devil takes control of a human corpse. They get to the room where the fiend is and Aki wants Denji to turn into his devil to see if he will be useful or not.  But Denji does not; he just walks up to the Fiend and slices his head off with an ax. Aki is like what the hell, why didn’t you use your devil powers to Denjis reply being when I use my powers they get really messed up. I wanted to make it painless for him.  This pisses off Aki. He slams Denjis head into the window and explains how they deserve no remorse.  We learn that his family was killed by a devil right in front of him . Aki then says what are you trying to make friends with these things and Denji says if there is one that would be my friend then yes because i’ve never had a friend. Aki walks away and says Ill remember that. 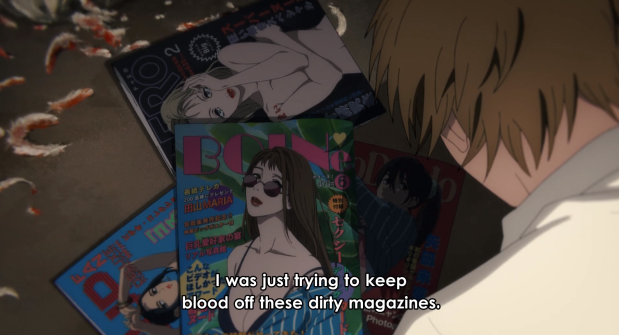 He has a small moment with himself after all this in the room thinking about how his life is currently a 10/10 seeing that he gets to take baths and eat food everyday but still it feels like something is missing. He then realizes that touching Boobs is the thing that may get the complete perfect score for his life.

Back at Makimas office he is still daydreaming about boobs, she is explaining that she is assigning denji a partner seeing as that team patrols in pairs of twos. Makima says be careful she is a Fiend then Boom we meet Power. Denji is like you’re a girl!!!! And a Fiend are girls even allowed to be Devil Hunters, Then he focuses in on her boobs and legit forgets about everything he was saying. 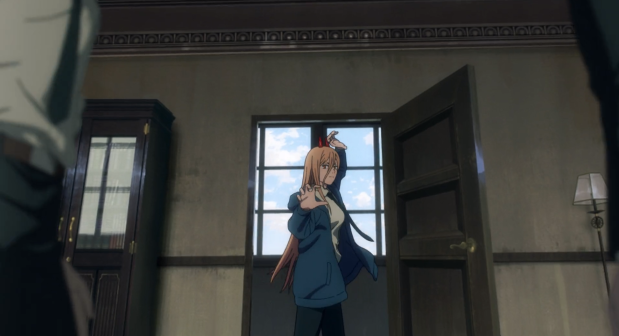 Makima explains again how this team is all experimental and that it needs to get results because if it does not the higher ups will want to do away with it and for Denji and Power that means death.

Power tells Denji that before she was a Fiend she was a devil that was feared by all. And that’s probably why they aren’t seeing any action on this patrol, Denji realizes that Aki probably set this up so he could look like shit and not get anything done. Is Aki trying to get Denji killed?! 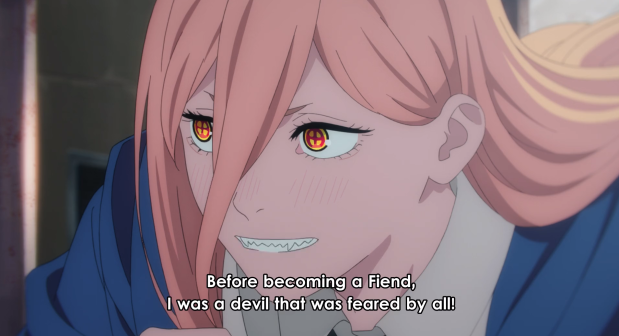 Power gets the scent of blood and takes off running towards it. Denji chases after her to aid but it is no use because she is super fast.  We see that its the sea Cucumber devil. Before anything can really happen Power jumps off the building, forms a massive hammer with her blood powers and smashes this thing to bits. The scene ends with power screaming the kill is mine! And Denji looking down from the building realizing that she might actually be insane. 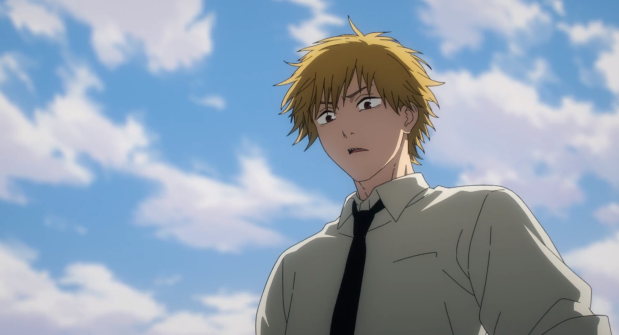 Outro song for this episode was a solid 8 loved the bass work on it.

This episode got a 9 from both Thomacus and Asylum

Here before the barking

Makima gives off a bad vibe.

Little did Aki know that he was in the presence of the worst devil of them all: The testicle Devil!!!

Welcome back to Chainsaw Chewsday ladies and gentlemen!