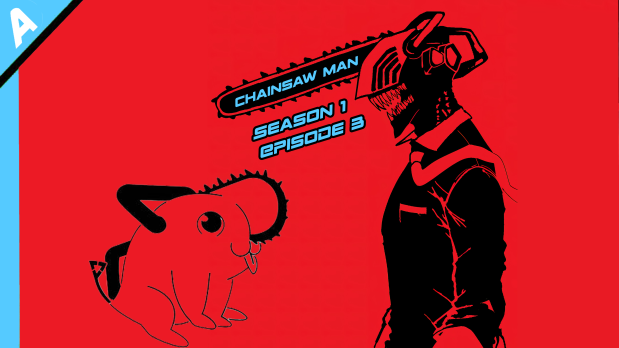 The episode opens up right where we left off on the last one at the scene where power killed the Sea Cucumber devil. Makima is  telling both Denji and Power that Power needs to be a little more cautious and think before she acts. Power then tries to turn the entire thing around on Denji by saying well he told me to kill the Devil! They both go into a little back and forth because now Denji is asking why she is lying and power is trying to portray her lie as the truth. Makima just sits by quietly and watches it happen for a while.  After some time she says could you quiet down and they both immediately snap into attention like some dogs. Makima says I don’t care who said or did what I just want to see you two work together can you show me that and power agrees kind of confusing Denji. 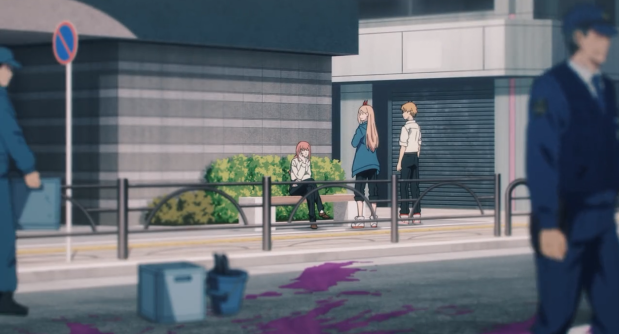 After this we see both Power and Denji at some vending machines, as they are looking about, a cat walks up to power. Denji in the background says loud enough for Power to hear, You know being able to just grab a drink like this is a dream come true to me, but if we keep screwing up this will be the least of my problems. He’s trying to have a moment with Power right here because Makima told him to get her under control.   Power decides to open up a bit by telling him about her cat that got taken away by a devil.   We learn that before Power could get her cat back she was taken into Makimas “Care” but she called it clutches. She says that really the only reason she abides humans and does that they say is because it may give her a chance at getting her cat back. 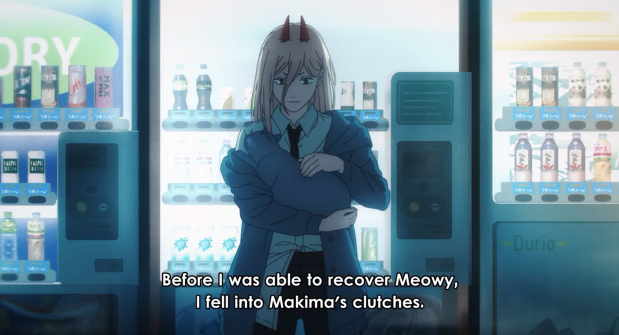 Denji is like that’s dumb as hell all that for a cat? Id do whatever it would take to fondle some boobs. He says id understand if it were a dog though.  Power has a moment to think and says what would you say to the prospect of fondling my chest after retrieving Meowy from that devil? Gasps and turns around, crushes his can he was holding and goes off. He says that fucking devil! Thinks he can just kidnap some poor cat! I don’t think so. I’m gonna kill the shit out of that devil. 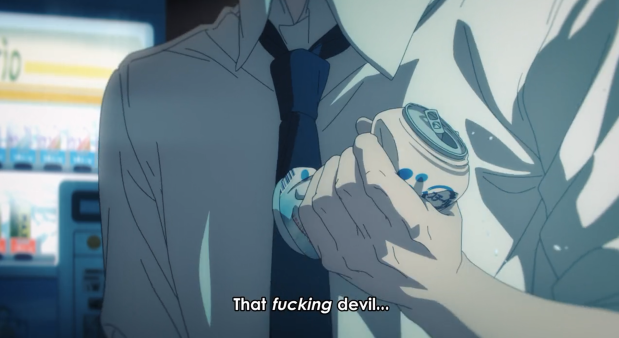 After credit roll Power and Denji are back at the devil hunters HQ they are trying to get leave approved for Power seeing as she can’t just leave on her own. They take off to get Meowy back. Power says that she knows where the devil is that took it but Denji is the only one who can fight it. Power says that if the devil sees her it’s likely to use the cat as a shield and if that happens then all is lost.  (Whole time Denji is just staring at her boobs day dreaming). Denji tells Power about Pochita and how he cant pet him anymore but it was ok because she is still in his heart.  But power does not quite understand this because she goes humans are dumb. 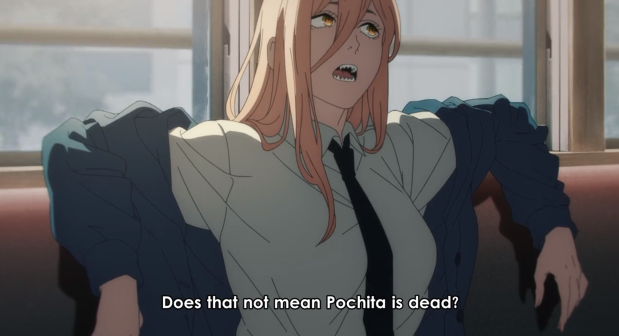 After this we see Makima talking to what looked like a board meeting. They are telling her information about a war it seemed like and they mention the use of devils by the military. They ask her how the hunting dogs are. She says that she has one that is promising and one that is interesting. They say then raise the hounds and put them to work do not get attached!  She was talking about Power and Denji!!! 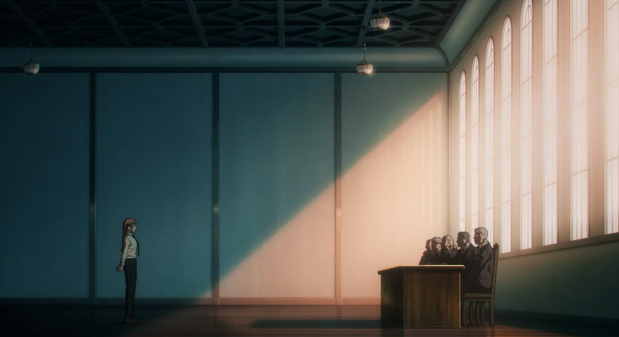 After that meeting Aki is driving Makima I would assume back to the office and he ask her why she has such high hopes for him. She explains to Aki that Denji can turn into the chainsaw devil and that name alone would be something to fear. But even so Aki is not convinced because he is still stuck on the fact that Denji does not have a real goal or motivation. Note Aki still has not seen Denji is his chainsaw form.

Back to Denji and Power they get to the house where the devil who took her cat is suppose to be. Denji says hopefully I don’t have to turn into my chainsaw form losing that much blood sucks.  But Power also has not seen his chainsaw form and just thinks he is a regular human.

Right as they get up to the house Power takes a shot at Denji! This whole thing was a setup. She drags his unconscious body into the house. 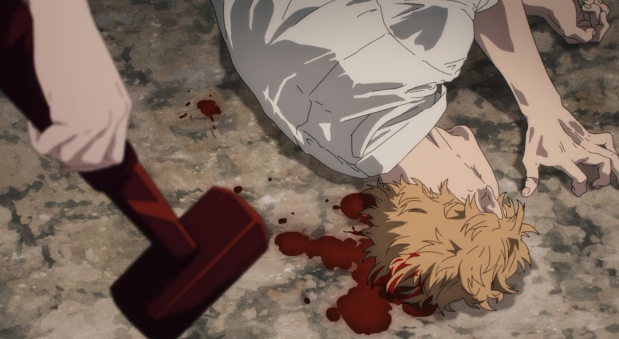 Turns out Power had to get a sacrifice for the BAT DEVIL and sadly in this case she used Denji for that. The bat needed human blood to heal a wound that the humans gave him i assume when hunting for him.  He takes a drink of Denjis blood buy yells out that it’s disgusting. The Bat says I need to cleanse my pallet with the taste of better human blood. Then jumps onto the roof.  Power while looking up at the bat says I am amazed you actually believed my story. 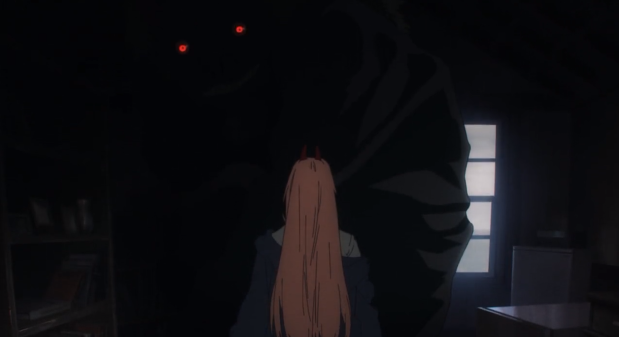 Power says Bat I brought you a human as promised now release Meowy! He’s like yes I did say that didn’t I BUT I have not yet punished you for bringing me disgusting blood.   Then he eats the cat! Cage and all! 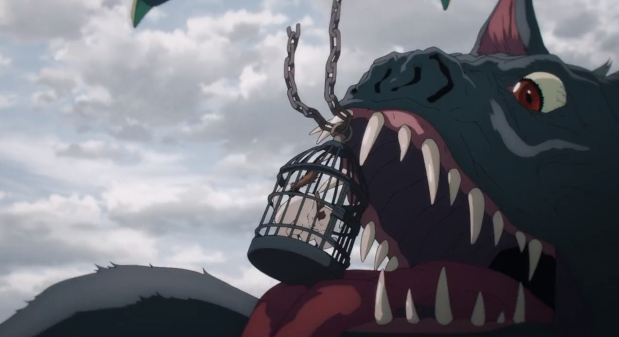 After this we get a flashback of how power and meowy first met. Her plan was the fatten up the cat so she could then eat it.  But I guess she wound up changing her mind.  Then one night as she was on a roof looking at the stars the bat devil comes with an arm missing and took the cat demanding Power get blood for him so he could heal.

Back to the present I think seeing the bat eat her cat was enough to snap power into a different mindset. She tells Denji that she now understands how he feels about not being able to pet Pochita anymore seeing that her cat is gone.   Swiftly after this the bat devil grabs her and just eats her with no fight at all. But her blood is no good for the bat seeing as she also if not a human. The bat flies off saying how he needs to go eat children, then a virgin and then maybe a man just to get the nasty taste out of his mouth.   But he looks down and Denji had grabbed onto his leg as he flew off   Denji looks up at him and says ( Give me my tits back) meaning Power. He pulls the chain and transforms into chainsaw man. And gets to work the Bat is surprised that Denji is a devil.

They Literally fall out of the sky and into a office building. Denji sees a lady and is like hey dumbass you want to get eaten?! Then waves her away. 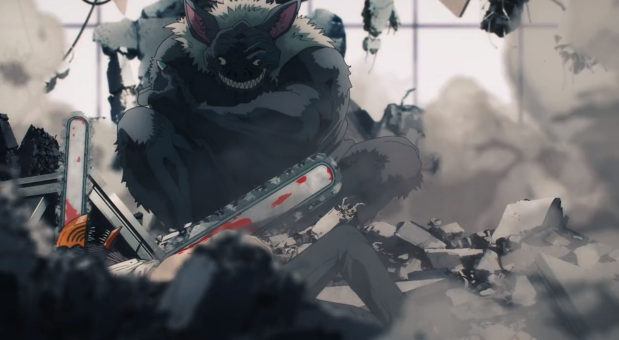 Denji looks at the bat and says I’m going to split your guts open and then cop me a feel.

Then they start fighting. The battle was pretty intense with a lot of environmental destruction, and we even get to see just how strong the Chainsaw man really is by catching an entire car with a man inside and then throwing it back at the bat. I’ll say that this was the big fight we have been waiting to see, considering how small all the other ones up until this point have been. 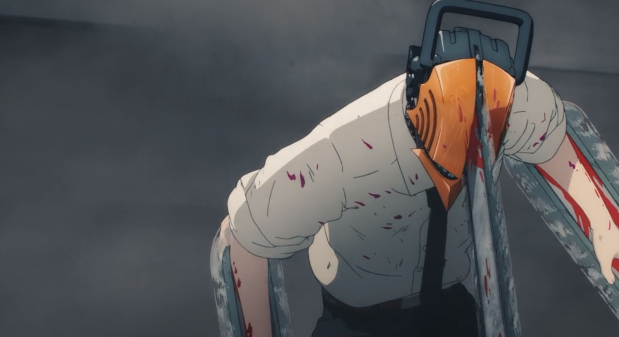 One thing leads to another and Denji absolutely obliterates the devil.  But remember That Bat had eaten Power and her cat. So are they ok or are they dead?

Outro song  8 out of 10 I didn’t like how it was so sporadic before it went into the clean transition and all came together.

Episode was an 9 from both Thomacus and Asylum.

The ending is BANGER

Bro, the more I watch the more I’m getting evil vibes from Makima. Why is Power so scared of her?

“Gimme my tits back”

This show is like NUTTING for the first time…. SUPERB!!