Episode ends right at the beginning of chapter 12

Episode opens up with a scene of power from before Makima got ahold of her she was running around eating animals and hanging out with Meowy all while naked and she was just thinking about how Meowy is just a cat but when the bat devil told her to go get a human for him she ran to do it. Then her eyes open up and she’s looking right at her cat. As they close and open again she is in Denjis arms as he is holding her. He manages to save her from inside the Bat Devils stomach. There are guts everywhere. She asks him why he saved her even tho she had tried to kill him. He does not say a word he just points to her titty and makes a squeezing gesture. Power says what a foolish reason, which makes Denji think she is saying no. So he sits beside her and she’s like forgive my deceit you did save Meowy, so you can go ahead and fondle my chest. Denji screams out HELL YEAH! And starts waving his arms in the air. But as he is doing this one of his arms gets cut off! We see yet another devil this one looking like a giant earth work that had legs and would walk on them like a dog. Very hard to explain without you going and seeing it for yourself. 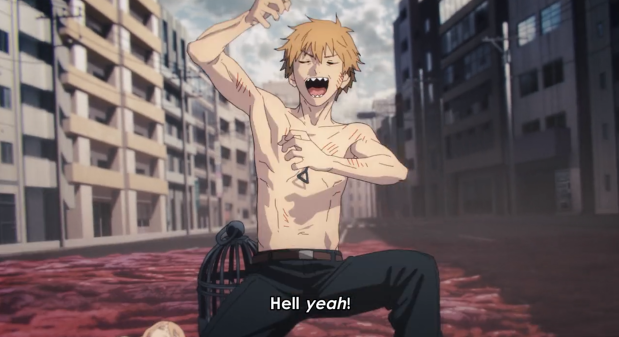 We learn that this Devil and the Bat devil were apparently dating. Power for whatever reason can not move at this moment they never wind up explaining why she couldn’t move here. So she tells Denji to take Meowy and run. Of course Denji is not going to do that so he pulls his chain to transform but does not have enough blood in his body to fully do it so he is about to fight this entire battle only partially transformed. This devil looks down and says well you are pretty cute so I’ll let you go. But your friends will die meaning Power and her cat. Denji puts his hand up making a fist to fight and she says then you die too. They start going after it and this too was another pretty decent fight. (Considering Denji was probably only a quarter transformed) The whole time they are fighting Power is just laying there on her back remember she cant move She’s watching and thinks about how Denji is fighting so fiercely all just to fondle her chest. 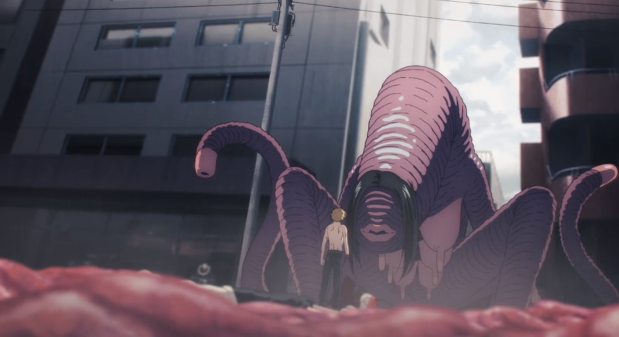 Denji starts to look like he might be getting the upper hand when he is struck down, the Devil asks if this is a joke and how someone like him managed to kill her Bat! As she is telling Denji how he ruined her and the bats’ plans to destroy humanity. He stands up and says I’m not dying before I cop a feel! This devil almost feels the same way power feels about Denjis dream. She says that’s ridiculous, to think Batty was killed by someone with such a trashy dream! Denji has a moment here and reflects on everyone who has told him how dumb the dream is being this devil, Power, and Aki. he gets pissed. This angers him enough to cut the devils neck a little bit with his half transformed saw! He says everyone wants to trash talk my plans! But i guess all your guys fancy plans make you all hot shit huh!? How about this is I murder you that means your dreams are weaker than fondling a tit! 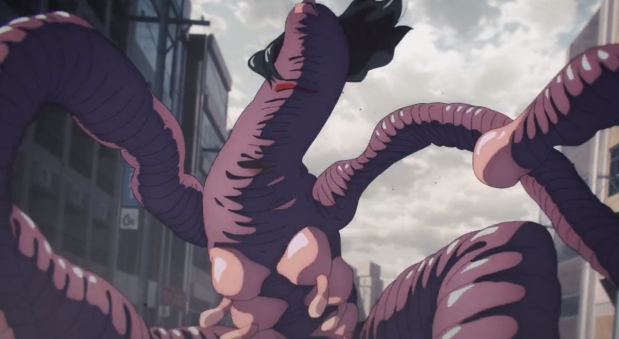 They start fighting again and Denji is killing it for a while but the Devil winds up getting him as he tried to fly towards her by grabbing her hair she wound up thrusting her tongue through Denjis body! Right as she is about to eat Denji we see a hand come into the screen making a fox shape. Aki says KON and a massive fox comes out of no where and bites the devils head off. The wolf analyzes this devil and we learn that it was the Leech Devil. 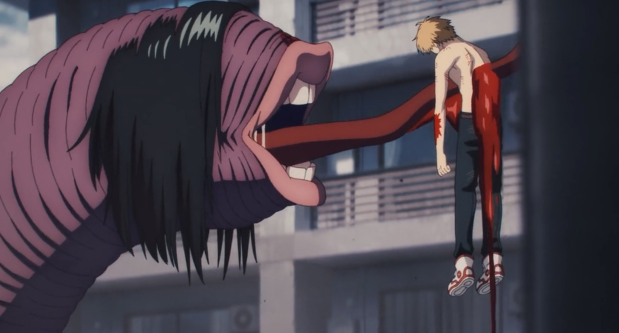 Here as the fox devil is vanishing and smoke or fog is everywhere we get to see a bit of the crew that we will be fully introduced to as this season goes on. Aki gets Denji up and says you and the blood devil need to be debriefed, as he is walking past Power still on the ground she says what about meowy he says get the cat to a vet. So it looks like she will get to keep it! 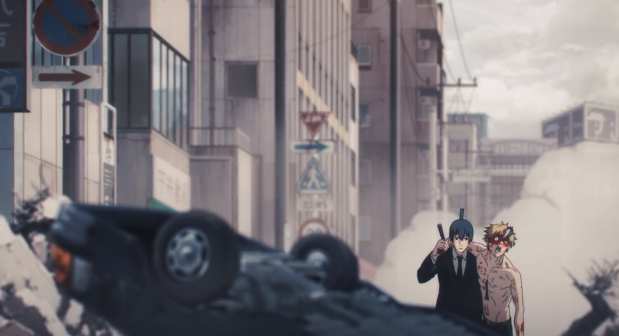 After all this in the Hospital we see Denji in a bed and Aki sitting beside it. The found Denjis arm and wound up getting it infused back onto his body. The whole time Aki and Denji will be talking here Denji will truly only be focused on the apples that Aki was peeling. We learn that Aki has a contract with the Wolf Devil and usually he has to give some blood for the devil to work for him but for this he had to give some skin. 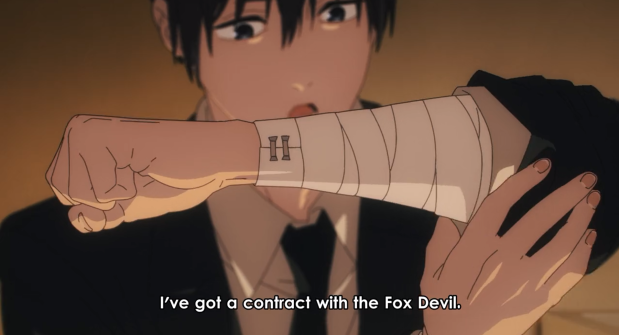 Aki breaks it down and basically says that he knows power tried to kill Denji by taking him to that house. They say them leave on the cameras and then found a bunch of Denjis blood leading up to the house. Aki says you are trying to protect a devil again. To which Denji replies I don’t know? Is that how it all happened? Aki says if I dig deeper into this and report it to the higher ups you and power will both be put down. But since there were no fatalities if you are willing to accept one condition I will let this slide. He slides the apples towards Denji and says you need to do what I tell you to. Denji says that he will keep it in ,mind and says how his dream may not be as big as everyones elses, but he is serious about it so Aki can count on him.

Aki walks out the room to which we see power in handcuffs! Denji wound up saving her ass because Aki lets her free. 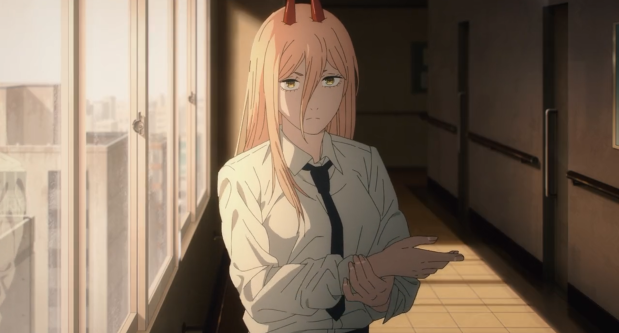 Back at the Headquarters later that night Aki goes to chat with Makima. Of course before he actually knocked on the door he had to fix himself up so he would look presentable for her. 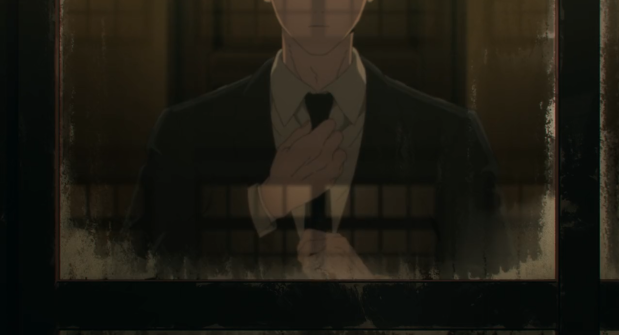 Something that I don’t get here is they both talk about Power and Denji being outside the patrol zone. BUTTTT both Denji and Power got approved for a leave. So they could go to the house. So that’s something I’m not really understanding in this episode. Basically Aki makes a case that sure they both fucked up but in the process they got 2 devils killed. He also mentions that there were no traces of gun flesh in either of the devils heads. This is important for the bigger part of the story later so remember it. As Aki is walking out the office Makima says you seem a little more flexible lately, is that Denjis influence? He goes no I have not changed at all! 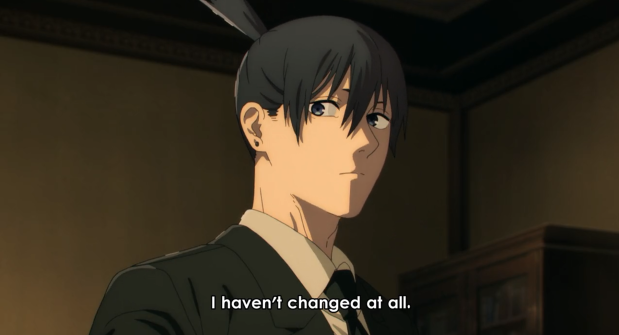 The final part of this episode takes place at Akis’ apartment. We see him doing just regular daily stuff and we also see Denji here and there remember he lives with Aki. When they are about to make lunch and they hear someone beating at the door. They think it could be a devil when WHAN the door gets busted open and it’s Power. She says that Makima told her she should go live in Akis extra room. 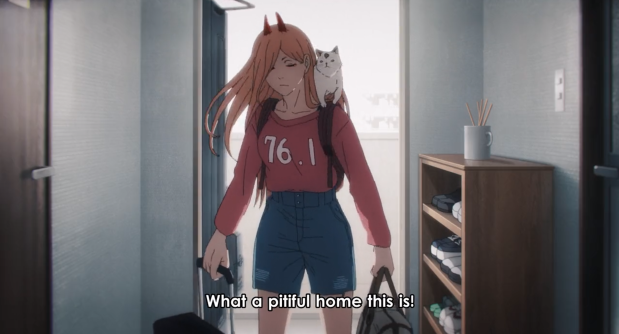 Here we learn that Power is an even worse roommate than Denji she throws her vegetables all over the house just because she does not like them, she does not like to flush the toilet, she does not like to bathe, her cat is everywhere, probably shitting all over the floor. We see Denji cleaning out the toilet that she clogged when she walked in. He turns around and goes hey shit devil, you stained up the toilet. Hes obviously mad. She proceeds to not say a word and point to her chest and make a squeezing motion. Denki is instantly not mad anymore she says we had a deal! She sits on the toilet and tells him that he gets 3 fondles, one for saving the cat, one for killing the bat and another for protecting her from Aki. He had his hands over his face and he is breathing all hard then he looks up and says She is an angel!! 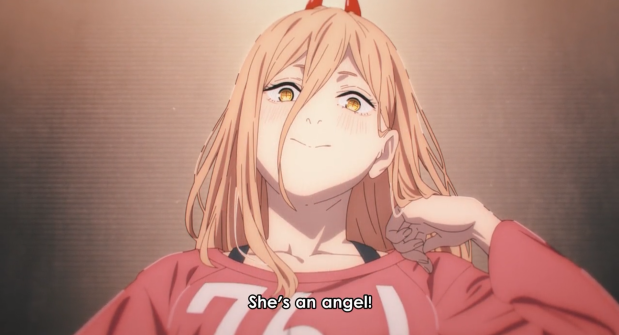 Outro song for this episode was a 7