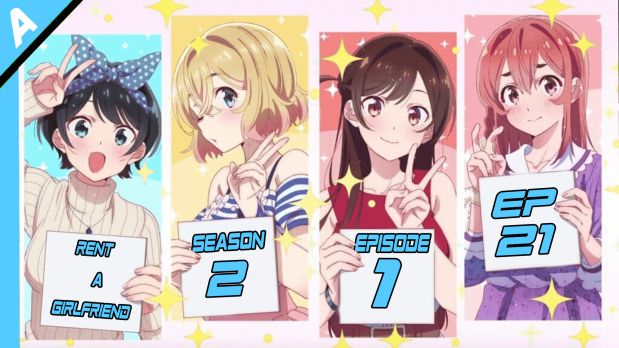 The time has finally come! Rent a Girlfriend season 2 is finally upon us and we are off to a great start.

Before we dive into this I want to point out that this season seems to both YeahXay and I That to be more vibrant. We don’t know if they have changed the color pallet or have come into using higher HD renders of everything but it is stunning! 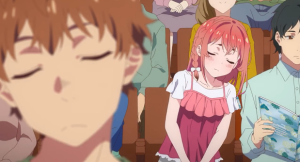 In the first episode of ‘Rent-A-Girlfriend ‘(or ‘Kanojo, Okarishimasu’) season 2, titled ‘Dream and Girlfriend,’ Kazuya Kinoshita struggles with the idea that Chizuru Ichinose might soon quit being a rental girlfriend, and he will have to make up a story to tell his grandmother. He later visits the theatre where Chizuru is going to participate in a play. If she performs well, there is a chance that an influential director who is also coming to see actors perform may give her a future acting opportunity.

As we stated in the podcast we were surprised that this entire episode wasn’t just a recap episode as most anime shows like to do going into their season season.  What they did do instead was give each main character among the girls and give them a small segment where they were basically introducing themselves and explaining they relationship to our main character Kazuya. This tiik up around 3 minuets of the episode. 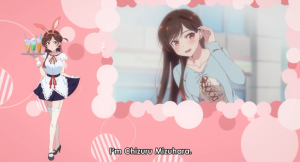 So i have to be the person to point it out.   They changed the intro song…..  Thomacus and I are both still on the fence about it, but YeahXay said he actually enjoys it. Hopefully it will grow on me.  If you want to hear it you can listen to the video below this.

This episode focused on Kazuya going to Chizurus play in order to see just how good she actually is at acting.  Remember he does not really want her to be good because that means she will more than likely get scouted and that will push her away from him. He gets there and notices that there is a talent scout actually present and ready to watch the play.  This makes him more nervous than he already was. 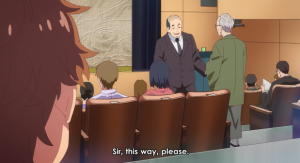 The play happens and he realizes that Chizuru is an amazing actress, the crowd is loving every bit of her performance.  This Obviously adds to the already massive pile of nerves that he is feeling over this. One thing I saw that I wished or at least hope they will touch a little more on is why Sumi was there at the play also.  We see her at the very end of the play wanting to go up to Kazuya but decides against it and leaves. 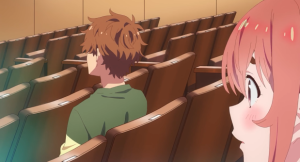 After this we get some backstage banter where the producers tell Chizuru how good she is. After this interaction she basically overhears the talent scout talking with the girl that played the lead role in the play. We learn that this girl is related to some higher up talent scouts, so more than likely she will get picked up for more work. 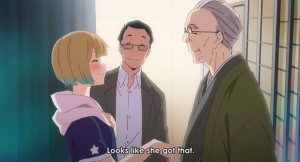 Upon leaving the location where the play was Chizuru runs into Kazuya, this causes him to drop his pamphlet from the play.  She notices this and sort of freaks out because she realized he was at the play.  Quickley, she says she can’t stop him from spending his own money however he likes. During this we learn that she did not get scouted, she thinks it is because she is talentless. Kazuya assures her that this is not the case.  She goes on to say that she will just keep trying all while going to school and doing the rent a girlfriend thing as a job.  Kazuya says that he will support her no matter what, even if he has to take up a second job.  He will rent her the next day then the next then the next. 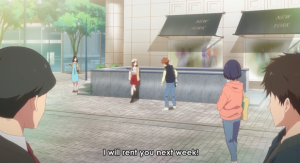 The final scene is Chizuru in her room back home being very sad because she didn’t get the part. She gets a call from the other people that were in the play thanking her for an awesome show and saying that they had to do it again. she hangs up and is just really torn up over it all. Then her phone goes off and then keeps going off to her realizing that it is Kazuya renting her over and over day after day for her rent a girlfriend services.  She cries a little bit then says, Stupid that’s too much! 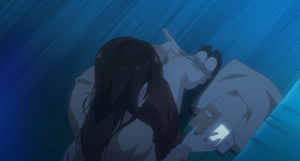 For a fresh episode we both thought it was pretty awesome! excited to see what else will come from all of this.

We both rated it a 7

you guys could wind up winning a streamy award for this season! Or at least be nominated to win one.

so good! I rated it about the same as you guys!

Yo Asylum check your emails. I got a story started for yall. Sending you a sample.

NUMBER 1 PODCAST IN THE GALAXY.

I think we all are

You can tell these guys really like this show just based on how they talk about it. Hopefully their final rating for the season isn’t high just because of that