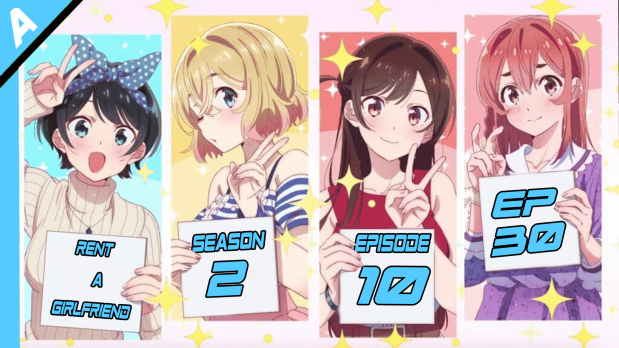 The episode starts off where we left off on the last one, Ruka was in the bathroom area with Kazuya and she is kissing him. This kiss was far too long and drawn out, and when they showed her tongue going deep into Kazuya’s mouth that only worsened it. Kazuya eventually stops her after letting it go on for more than a few minutes.  He says we can’t! To which we hear his grandma who was in the other room with Chizuru still say it’s time for a bathroom break.  Thankfully she gets stopped by Chizuru who says but Kazuya is still in there. Ruka winds up apologizing saying how she crossed a line there, but did not regret it because she doesn’t want to lose. Obviously talking about the great race between her and the other girls. What made the kissing scene even nastier was the fact that as she was walking out from the bathroom area she said that stuff about your first kiss tasting of lemons or strawberries was a lie huh? Mine just tasted like booze.  (so now we know that this was her first kiss) that will pop back up later in the episode. When she gets back into the living room we hear Chizuru ask where Kazuya was.  Ruka says oh he is using the bathroom. Does that not seem a little Sus to them all that both Kazuya and Ruka were in the bathroom area with the door closed for that long?!

After the intro when everyone is back in the living room you can clearly see that this kiss is getting to Ruka, but you can also tell it is getting to Kazuya a little bit as he is looking at her lips with his heart beating super fast. (Chizuru even says are you two ok? You both look pale) The grandma ads to this by saying yeah where did all your energy go? Did something happen? Kazuya is like oh no we’re good! Then starts to thinking in his head about just how crazy the kiss was.  He says he was putting her through more stress than he realized. And how all the things she was doing like going to his place and blowing up on Mami were all signs that this was inevitable. He even thinks back to a past conversation they had and how she was saying she was ready to have her first kiss. (he says this isn’t right, wasting your first kiss on this pathetic excuse for a relationship) So he is starting to feel bad about how he has been treating Ruka. The grandma cuts in here saying how she almost forgot that she had a gift for Chizuru, She pulls out a ring box and explains how this was her ring from when she was married then Kazuya’s mom also had that very same ring. This has all three of the younger people there in shock. Kazuya in his head is like OH HELL NO! The grandma says how they did not have anything else to offer her and she couldn’t think of a more appropriate gift for an angel like Chizuru. Chizuru even tried to turn it down by saying she cant take something so important to the family.  Kazuya kind of notices that Chizuru is in a pickle here, as he stands up to say something to help her get out of that situation Ruka grabs the back of his shirt. (Nudging to not do or say anything and let Chizuru suffer in this moment a little bit) Or hopefully have the truth come out about how they are not actually dating. As the grandma is telling Chizuru to try it on, Kazuya finally speaks up and says we can’t accept it! The show obviously drags this out a bit and he says how he cant have Chizuru accepting a gift like this for the reason that they are broken then right before he can finish saying broken up Chizuru’s phone rings.

She takes the call and comes out of the bathroom looking really worried which is what we saw at the end of the last episode. She learned that her grandma had become unresponsive.  Right here the camera shows Kazuya and its him saying (That was the moment everything began) Is that referring to him and Chizurus actual relationship? Everyone hops in a cab and heads to the hospital.  Note that they just left Ruka behind. They get there and Kazuya’s grandma is like you two go. I’ll pay for the cab which Chizuru is a little hesitant about but Kazuya grabs her arm and is like let’s go.  We see a flashback of when Chizuru’s grandma was asking Kazuya to always be there for her. And this is proof that he is doing just so by going to the hospital with her in the time of need. They get in the room and her grandma looks fine! She’s even joking and having fun with Kazuya’s grandma. Kazuya’s grandma apologizes for inviting Chizuru over when her grandma was so sick and she replies by saying it was fine because She could see in Chizurus’ face how much she actually wanted to go. Kazuya looks at her with his mouth open , Chizuru is like Grandma what are you saying. Then looks over at Kazuya with a blank face because she knows as well as us that he was probably sitting there overthinking it. Or she was just generally upset that she got outed. A doctor comes in and asks to speak privately with Chizuru. She tells Kazuya to watch over their grandmas as she walks out with the doctor. He says in his head that her asking him to do so was so natural and couple like. Then we see both grandmas looking at him getting ready to blast him with questions about him and Chizurus relationship.

Cut to some time later and Kazuya is walking down a hall because the grandmas sent him to go get some snacks when he runs into Chizuru.  She tells him that the doctor had bad news. She says how her grandma seems perfectly fine but does not have much time left. He asks if it is going to be ok? To which she replies with no definitely not ok.  He says no, are YOU ok? SHe goes what you worried about me now? But yes I’m ok.  It seems like she has mentally prepared herself for what is to come with her grandma. He takes off walking right past Chizuru, she goes where are you going.  He says isn’t it obvious I’m going to tell your grandma that our relationship was a lie. I can’t cause you any more trouble. If we are running out of time this is all the more reason to come clean. He goes to walk away again and we see Chizuru grab his shirt sleeve. She says I don’t want her to know. I don’t want to tell grandma that we are breaking up. She has taken a real liking to you and she is worried that I’ll end up all alone after she is gone. She basically says that they might as well keep up the fake relationship to keep her grandma happy seeing as she does not have much time left anyways. What would be the point of telling her now.  After she walks away to go back to her grandma, Kazuya asks himself if this really is the right thing to do. (Rukas kiss has really shaken up how this man feels) As they are leaving the hospital Kazuya’s grandma sends him to hail a cab. She likes to make sure it is a pretty one. My angel Chizuru deserves the best. The grandma turns and looks at Chizuru and at first I thought she was mad because that’s how her face looked.  But she then hands the ring box to Chizuur again. She says your grandma isn’t going to make it is she? She looks all happy but one look at her face tells the whole story. I heard that you have no family if worse comes to worse and as she is saying all this she grabs Chizuru’s hand and is putting the ring box in it. She then says if you ever need money, pawn it off.  And no need to wear it if you don’t want to. In the cab ride home we hear Kazuya say “Chizuru was putting on a brave face but she looked smaller to me that day she was probably weighed down by pain, fear, sorrow and a ton of emotions.” They get back to their apartments. First off I love the captions they put over his fish. One said wow look who finally decided to show up and another said You better have bought some good food. Cut to Chizuru in her apartment and she is taking a shower looking real sad. After the credit roll we actually got more episodes in this one. It was Kazuya and Ruka out eating somewhere. Kazuya was feeling awkward because of the kiss. They were eating some kind of pancakes. Ruka was like oh the cream just melts in your mouth.  just making this man even more nervous.   Ruka then asks if Chizuru and her grandma are both ok. Kazuya is like yes they are, I’m sorry we made you go home alone. Ruka was ok with it though because of the emergency situation.  Ruka then says that she is calling a truce with Chizuru and Kazuya for now, She says how she still wants to be Kazuya’s girlfriend but understands the nature of the situation and that it is not the time to go on the offensive. I think seeing Kazuya almost tell the grandma that they weren’t actually dating opened up Rukas eyes a bit. She actually seemed really mature in this scene.  Or at least a little more mature than we are used to seeing with her. As they are leaving the restaurant Ruka says by the way whenever you want to do it, just let me know. And also says kissing is fair game now though? Then you see Kazuya’s face turn beet red, obviously embarrassed that she said that? She gives him a birthday present but we don’t get to see what it was.  That has me curious. On his way home he has a little breakdown. He says I have finally made up my mind to come clean about Chizuru and I and now they are both against it. After this for the next episode roll we see a calendar with Kazuya’s birthday on it, and a gift on a desk then we see Sumi and she says lets do this. Then we hear Ruka talking to Chizuru saying how she has called a truce for now, but says promise me one thing no kissing Kazuya. Then she is like Wait he is the one we need to be worried about, that’s it I’m calling off the truce. All the while he is walking around somewhere with Sumi.  The next episode is called guide and Girlfriend.

Asylum Rated this episode a 6

Thomacus rated this episode a 6

All I gotta say is FUCK the GRANDMAN she’s pushing it way too much.

kazuya needs to end things with ruka. idc if shes trying to win over the person she loves, shes so toxic and he cant change who he loves and would only lead to her as a second option. theyre just hurting each other

Why doesn’t he just break up with Ruka, it would make everything so much easier for everyone

KAZUYA REALLY LEVELED UP ON US