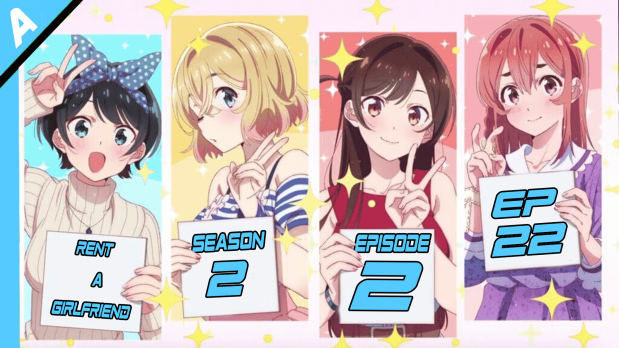 In the second episode of ‘Rent-A-Girlfriend‘ (or ‘Kanojo, Okarishimasu’) season 2, titled ‘The Usual Girlfriend,’ Kazuya begins hiring Chizuru more frequently than usual so that he can help her financially to pursue her acting career. However, to his surprise, Chizuru stays with him even after their date, and they eventually end up spending a lot of time together. When Kazuya meets her grandmother later that night, she asks him for a favor 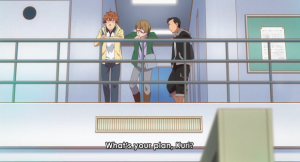 This episode is comprised of 3 major sections. Of course there are some smaller parts in it but all just small filler. Like when Kazuya was talking with his boss at the very beginning after the opener.

The first major section is Kazuya and Chizuru’s’ first rental date. As usual Kazuya is simping throughout this entire thing! As they sit down to have lunch Chizuru says that she needed to talk to him about something, that something was the fact that renting her out every week is going just a little too far.

She says how she appreciates the fact that she gets a big payout from it and that he wants to support her financially, but it’s just not fair to the other clients. She also mentions how Mami told her to stop seeing him (I think this was from back in season 1) And finally she mentions Ruka, Chizuru wants to try and avoid upsetting Ruka because remember she and Kazuya are dating.. 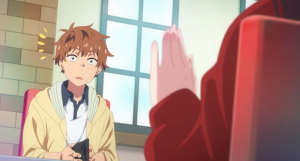 (there is a flashback scene here where it is Kazuya asking Ruka if it would be ok if he goes on dates with Chizuru. Well he was more like begging her. She goes off on him here accusing him of basically saying he wanted to cheat on her to her face. And how he was the one who was saying how he wanted to make things between them official. He basically says he saw for himself that she has all the talent in the world and wants to support her dreams. (Meaning Chizuru)  ruka points out that her other clients could help support her and how it does not necessarily have to be Kazuya. Which she does have a point. One thing leads to another and ruka basically gives him the ok with the promise that he will bring her to watch one of Chizuru’s plays so she can see for herself how talented Chizuru actually is.) 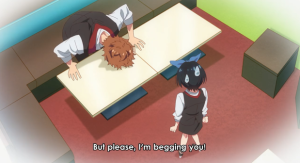 After lunch Kazuya asks Chizuru if she can just be herself around him when they are on their rental dates.  She says she can’t because this is work and she is actually using it to try and better her acting skills.  She says that if she did that she wouldn’t be acting like his ideal girl, and right here he tells her straight up that the regular her is his ideal girl!!!! FINALLY! We get to a point where he is actually telling her how he feels. She seems shocked by this a little bit.

In natural Chizuru fashion she ask where this is all coming from and then tells him to quit being so corny. Then says “but, ok if you say so” quickly she takes this and turns it around to not be personal but work related and says then I shall act my natural self because the customer is always right. 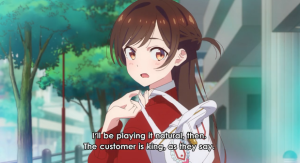 This brings us into the second Major section of this episode.

As the date ends the clock strikes 5:01 which means Chizuru isn’t working anymore. She turns around and asks Kazuya if he is free and if he wants to go somewhere with her! She winds up taking him to the batting cages, we learn that she comes here when she is upset. She obviously isn’t upset here so is this a real date that SHE asked him on? 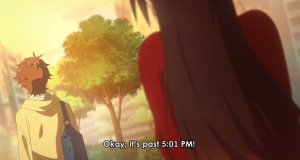 She winds up telling him that she hates going there alone because all the guys wind up hitting on her.  SO maybe she only brought Kazuya there to keep the creeps away and we do get to see that it works. As two guys notice her but don’t approach seeing as she had her “boyfriend” with her. She points out that this ISN’T a date and that their interest just so happened to align. At the end of this Chizuru winds up hitting a home run they both get very excited over this she runs out the cages and puts her hand up for a high five, This takes Kazuya by surprise. He winds up putting his hand up but still in shock does not move it, Chizuru thrust forward and smacks the shit out of his hand. 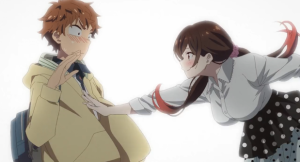 This show does a really good job of confusing you. One second you think Chizuru is all business then the next it’ll have you believing that she is starting to get feelings and thats why we’re seeing small moments like this.

After the batting cages she says that there is somewhere else she wants to take him.

This will lead us into our third important section of the episode.

She takes him to the Hospital to visit with her grandmother. (Remember both of their grandmothers think they are actually dating) Her grandmother insisted on seeing Kazuya and Chizuru could not convince her off of wanting that. We learn that she had only taken Kazuya to the batting cages to kill some time in order to be sure they made it just 15 minutes before visiting time ended at the hospital.   (or was that really the reason?) 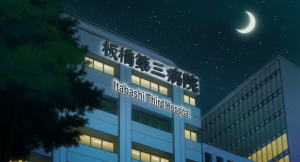 First off, I love her grandma. She is funny and not afraid to speak the truth. To give you the shortest version of what went down in this hospital visit. Chizuru walks off to refill a vase for her grandma. In that timeframe her grandma starts talking to kazuya. She basically says she has a favor to ask of kazuya. She wants him to always be there for Chizuru. She tells him how she has always been a needy girl, and how the kids in their neighborhood use to make her cry. This made Chizuru basically build a layer of armor out of ice around her.  She seems strong and confident  but in reality she is lonely and needs someone to see her for who she really is. 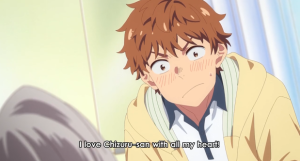 They go home after the hospital. We see Kazuya rating Chizuru, on the rental app and saying how he wont let her grandma down. 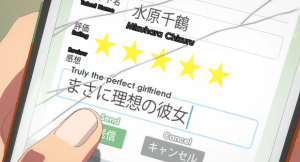 This for me is where I went OH SHIT!

He hears a knock on his door.  It’s Chizuru! She is saying that she lost her key….  But the way they made it seem it wasn’t just that, she took a while to say it and had a certain look in her eye also the way she said it, all soft and slow.

After this we hear Mami (this is preparing us for the next episode) saying hey Chizuru what do you mean you lost your key? Are you just saying that in order to get into Kazuya’s place and do the nasty… They also show her at Kazuya’s door turning the doorknob.

Then it says next time to rent a girlfriend… The return of….. The girlfriend..

Both Thomacus and I rated it an 8.