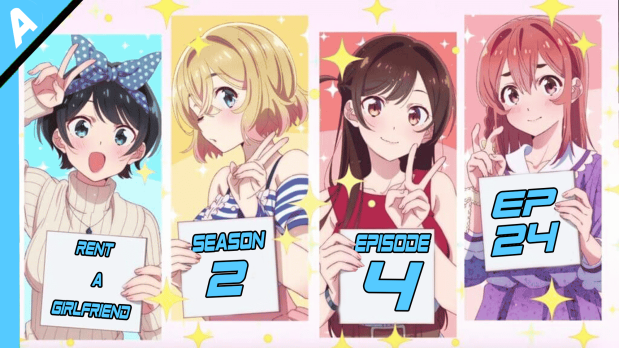 This season so far has got me slightly thinking that Mami is acting normal, I know that won’t be the case.  But speaking for the present right now, that is the case.

What’s got me saying this is the very beginning of the episode when Mami and Kazuya were talking in an empty classroom. Basically Mami wanted to let Kazuya know that she knew Chizuru was a rent a girlfriend. (But remember Kazuya already knew that Mami knew) . She then mentions that it’s why she went to his place the night before.  She was going to let him know that she knew.  Good thing she didn’t see them together, she may have thought Chizuru was a hooker rather than a rent a girlfriend. But she does not seem mad, rather she asks if it’s her fault. She asks if she drove Kazuya to do this. He of course says no (Which isn’t true) and claims that all this is just social research. As Kazuya is apologizing for introducing Chizuru to Mami and the rest of the gang, Mami asks if he has fallen for Chizuru.  This interaction ends with mama basically saying You only live once, get a real girlfriend and stop faking it with Chizuru because you will wind up missing out on a whole lot… She even goes so far to even say she isn’t belittling Chizurus work, and that he needs to understand that at the end of the day it’s just business and only that..   What a wholesome interaction! Even Kazuya is shocked that Mami was so nice and wholesome about it, he admitted that he thought she was going to chew him out!

After Mami walks out the class it shows her standing at the door saying Lies, Lies and more lies  what a loser.  So she was just being nice to his face to try and find out some information.  Who really is the good actor in this show!

She mentions the bag also and says that she doesn’t know for sure that it’s Chizurus but knows something is indeed going on. 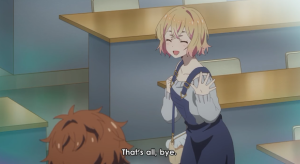 Now like we said in this episode she will be going over to Kazuyas for a sleepover. At least in her mind I believe that she knew she was going to be sleeping over.  (we will get into that)  Ruka planned to go over to Kazuyas and cook him a turtle curry, Which to me doesn’t sound good at all!

She makes it a point to keep calling herself (The girlfriend) over and over during their time together. 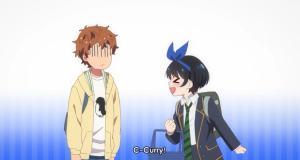 As she is cooking the curry she is doing cute girlfriend things like bringing Kazuya a beer which he refuses because he says this isn’t a time for beer! I assume because he didn’t want to get drunk and hookup, so he makes an excuse that he has been partying too much lately and wants to give his liver a break. So Ruka is like yeah sure then proceeds to pour the beer into the pot she is cooking in, because she forgot to get cooking wine….. Kazuya walks up as he notices this and sees that she had the recipe for the curry written down on a notepad so he looks it up to see that turtle curry is indeed a real this.  One thing to notice right here is that he is still using the phone case that Chizuru bought him.  This will come back into play a little later. 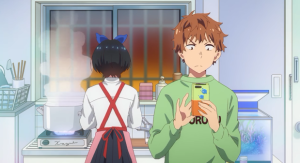 As they are eating Kazuya says how good it is, Then they proceed to watch a show together.  Kazuya notices that she has a little more cleavage showing than normal.  And starts to think in his head how they went shopping together, cooked dinner, ate, and are now watching a show all without any money being involved. Really just daydreaming to himself what it would be like to have a real girlfriend.

He notices that she is texting someone and trying to hide it, as he looks over her shoulder he sees that she is texting her mom saying that she will be staying the night! Kazuya freaks out, Ruka says what’s the big deal, I let you go out on dates with Chizuru, i want to have some lovey dovey  time with you as well! All the while she was sort of walking out to leave his place i assume because she was embarrassed that she got caught maybe. THEN! As the door opens its storming! Kazuya puts the news on to see that there is a typhoon happening!  (I think Ruka planned this perfectly) she KNEW this was going to happen so she went over that specific night because she knew Kazuya wouldn’t put her out in a storm and also the trains quit running during a storm essentially making her stranded at his place. 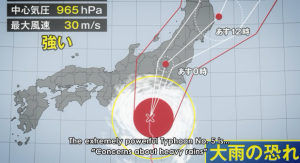 After Ruka’s shower scene we get to see her in a really natural state that Kazuya points out later, she is in a shirt only and has no makeup on. As they are talking Kazuya puts his hand over her mouth and says Keep it down because the girl next door will hear you. This upsets Ruka because even at this point with her half naked in his house he is still thinking about Chizuru.

This scene had me geeking out! Ruka is laying down on Kazuya’s bed and he is on top of her,  and she is basically saying ok I understand I’ll respect everyone around here because I’m one step ahead of Chizuru anyways seeing as I am spending the night over here. Then she yells I SWEAR, Kazuya throws her down on the bed with his hands over her mouth and is like seriously stop it! This happens a couple more times throughout their dialogue here and it was so dang funny! 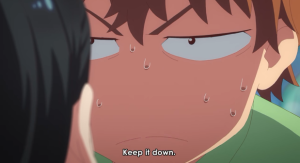 Kazuya goes to take a shower and decides to squeeze one out in order to have post nut clarity (literally what they said in the show!) When he gets out Ruka has some hot milk for him and his facial expressions are just dead seeing as he’s not distracted by lewd thoughts. I think Ruka knew what had happened in the shower.

Ruka goes into her bag to find a pic she took with her friend to show Kazuya and two condoms fell out!!!!   This shocked Kazuya and she said oh these were just encase. He looks at her and turns off the lights and goes lay in the kitchen to go to sleep! 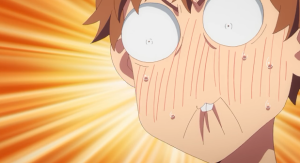 This next part was pretty interesting: the kitchen floor sleep scene. As he is laying on the floor thinking about what had just happened he is thankful for doing what he did in the shower because he says who knows what would have happened.   AS he is laying there he feels something up close to him spooning him, its RUKA! As she is rubbing his back and on his stomach he is freaking out fighting internal thoughts, Then he opens his eyes and sees the phone case that Chizuru gave him. This snaps him back.  Ruka starts talking, she basically says that she gets it, she can talk the talk but isn’t attractive enough for Kazuya and how she isn’t as mature as Chizuru. Basically to me it seemed like she was trying to down talk herself in order to guilt trip him a little bit.

Kazuya turns around and pins her arms to the floor and says  not attractive? ARE YOU KIDDING ME?  I want to make you mine right now (Does that mean sex) then says but I don’t think this is love  I cant make the next step. He does however saw that he is happy and how before Ruka he never had a girl say she liked him to end this conversation he says so please keep your distance from me tonight because I am this close to making a huge mistake, IN his face right here you can see that he really was holding it in.

Ruka goes back to the bed kind of stomping but then they show her face and she is happy. As she lays there thinking about all that he just said how she is cute and everything else. 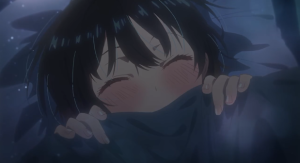 The morning after Kazuya looks like shit! And Ruka points it out. Ruka leans in and says we can save the sex for another time.  Stressing this dude out even more! 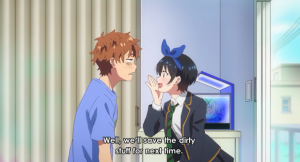 On her way out she is standing by the front door that is open and says all loud thanks for the good time last night Kazuya and starts bragging about the night.  Trying to make sure that Chiuru heard.  This dude falls to his knees!!!!! Shocked and scared. 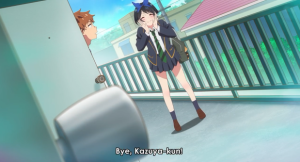 After the credits they show Chizuru sitting by her door. She heard it all!!  She looked a little sad about it! 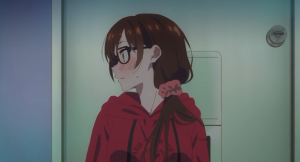 For the next episode segment it seems like Ruka and Mami will be discussing what went down?

Asylum rated it a 7

@Jax176 you need the touch of a woman

Ruka is lowkey a gigachad for that move at the end

Honestly, Kazuya really ought to just tell Mami to F**k off because it’s none of her business. It’s actually pretty astounding that he still feels this much pressure from her when they aren’t even in a relationship anymore.

If you hate Mami-Chan, then I hate Kazuya, he’s in Univ. but he’s still dumber than a doorknob. In my opinion, he doesn’t deserve any of them, too good for him. I’d punch him if I could.

This is his entire problem.
Hes not confident in himself and hes also not emotionally mature.
His first girlfriend hurt his feelings and that threw him into a hard hole.
He ended up trying to console himself and found someone he likes.
But because he doesn’t believe in himself it ended up being just to impress his ex until it got carried away became a huge mess.
Now he has a beautiful girl who hes “dating” but his emotional immaturity wont let him just be honest.
His lack of confidence and other things is also what leads to him being tormented by an ex he doesn’t even like anymore.
Its a awful situation but this show is just going to stay as garbage because the MC is showing 0 signs of growth.
So tune in next week for another awful episode that you cant help but watch

For any young man watching this, dont be like kazuya !

guys… ima be honest here… this show stresses me the fxxk out…. get over her already. she doesnt fucking like you meanwhile you have agirl doing what you wish this other girl did for you and is just as cute… he makes me mad af

this motherfucker. ruka is 100 times better than the others

He so does not deserve the goddess that is Ruka.

Sorry but Mami swan is better

I shouldn’t have to point out who the obvious queen here is.

When will they get butt booty naked