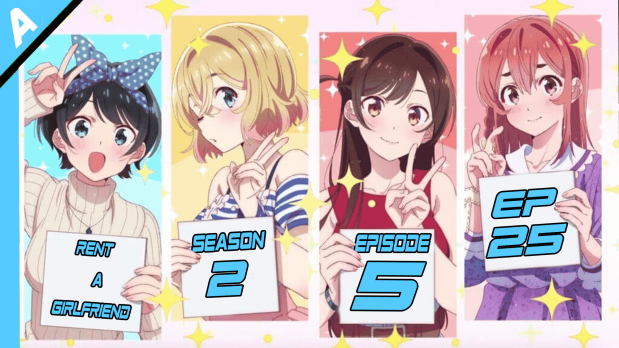 Just like we said this episode leaves off sort of right where the last episode did.  Except it is in the timeframe of 3 days after the sleepover. We see Kazuya in his apartment and it is a complete mess! As he starts to pick up he heads outside to throw some trash and who does he run into? None other that Chizuru who was also on her way to toss some trash.  As they greet each other he notices that she is being a little strange, Distant is you will. He day dreams for a little but about how hot she is, noticing that even without makeup and in her most natural form she is still a 10/10.  As they get down to the dumpsters He mentions that he will probably be renting her next week.

Chizuru hits him with the old classic (Is Ruka ok with that) letting him know that she heard everything and knew that she stayed the night at his house. HE freaks out about this. 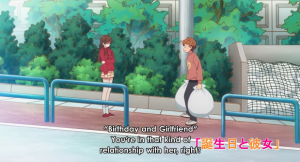 Basically as they stand by the dumpster outside its Kazuya trying to convince Chizuru that He had not invited Ruka over to sleep. He explains that she went to cook a curry for him and he had no idea that a Typhoon was hitting.  (does no one in this universe watch the news?) he explains how he couldn’t put her out in a storm like that.

Chizuru calls him a liar and says that there is no need to be lying because after all she is just a rental girlfriend for him SHE kind of plays a pity party right here saying how she is sorry for making Kazuya worry about her ( I assume she is talking about their big conversation they had on the front balcony in the last episode) and how she was the one who told Kazuya to go out with Ruka in the first place.  She then says that he should however start drawing some lines.

Then we see Chizuru in her house practicing some lines (These lines will come pack into play later in the episode) but while she is doing this she is thinking in her head about ruka being over at Kazuya’s Shes thinking about all the stuff she heard Ruka say by the door on her way out.  And this is clearly getting to her because she takes a moment and pats her face saying FOCUS FOCUS…  (Is she getting jealous?) 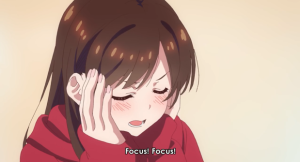 Cut to Kazuya next door in his house pacing the floors trying to figure out how he can get her to listen to him so he can explain the situation, so he devises a plan to hire Chizuru that way she would be forced to sit down and indulge with him. Upon going to rent her on the app he noticed that her birthday is that same week! This throws him into a little tizzy. He starts wondering what he should get her as a gift and remembers that he still owes her for when she got him the phone case.  That too will be mentioned later in the episode.

I want to point out here that i think the creators of Rent a Girlfriend have probably been listening to the Animag Podcast, because we come in and do Official Animag Podcast Advise from time to time and it has been proven to be one of our more popular segments when doing these reviews.  NOW all of a sudden we see Chizuru break in with a Mizuhara Memo! TF is that!?

Basically her memo was saying that the hardest gift to pick is for someone you have an unclear relationship with.  Obviously that’s towards her and Kazuya and it also points to the current scene we were seeing where he was having a hard time trying to figure out what to get her. 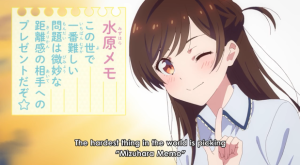 Then it hits him, he winds up hiring Sumi as a rent a girlfriend for the day because sumi Would know what to get Chizuru Seeing as they both get along.

We do see something here, remember in the first episode after the play when Kazuya was screaming at Chizuru about how good the play was? Well we see here that Sumi was actually in the area and saw all of this unfold. She hid behind a little ledge and they never saw her. (Hopefully we get a broader story to that than just this) 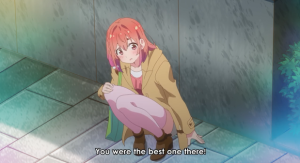 This entire date can be summed down to a very short explanation, he waits till the end of the date to ask about the gift because he does not want to be rude, So throughout the day he treats it like a normal date, Sumi literally says nothing (I hate that) seeing as this scene was over half the episode.  I understand that it is her character’s nature but still. Like when she gives Kazuya a hat in the store and he asks if he looks good she just claps and half assed says you look cool. . MAKE HER SAY SOMETHING! She is trying at this rental girlfriend thing that’s apparent.  I just hate that they made her seem like someone who didn’t have the ability to talk vs someone who is just shy. 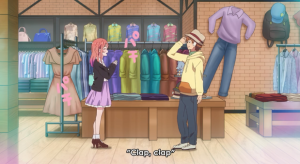 Finally comes the time for Kazuya to ask sumi about gift ideas.  She mentions a couple of things not with words of course but with typing on her phone and showing the text to Kazuya. Neither of them seem to work out, then she grabs his arm and drags him to the roof of the building they are in.

On the roof a play was taking place They called it a hero show.  As they watch for a little while Kazuya notices that the pink hero was CHIZURU!  The show also lets us the view hear the lines that she was practicing earlier in the episode at her house used here in the play to also let us know that it is indeed Chizuru. 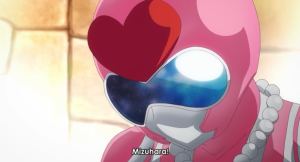 Still not really sure what was supposed to be the point that Sumie was trying to make to Kazuya by bringing him to the play. She does type in her phone at the end of the date that a present isn’t a thing, it’s a feeling. And says that she would be happy with anything if it got his feelings across. Then she looks at the pics that her and Kazuya took together while on the rental date and thinks about him screaming at Chizuru and gets a little sad 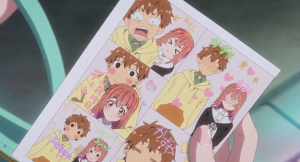 As Kazuya is going to walk away we see an arm grab his it’s sumi … She says wait, and then completely freezes up. After some time she asks what his birthday is.  He tells her that its June 1st then she runs across the street and waves to him.  Then goes around the corner of a dark building and adds his birthday to her google calendar.  She definitely has feelings for him 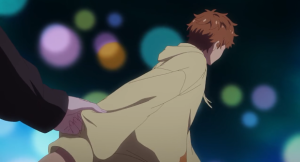 Back at the apartments Chizuru is home from her day she gets a text from the girl that we saw get scouted in the first play saying how she would love to do another play with Chizuru.  She was on the phone at the beginning of this scene with her grandma and mentioned that she was exhausted.  WE FINALLY GOT THE CHIZURU SHOWER SCENE. She opens her balcony door to get some fresh air and notices that there is a gift on it! On Kazuya’s side. Something I noticed, as she is trying to make sure it was him who gave her the gift she leans over her railing to look at his door. She does this with ease and alone but in the last episode as she was trying to do this same exact thing to look at her door from Kazuya’s side to see her door she 1 needed him to grab her waist or ass and 2 fell with him on top of her.  Was that all just acting!!! 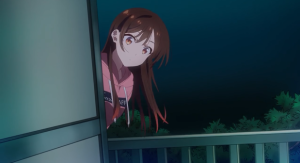 The letter in his gift says how she is always helping him out and gave him a case for his phone (she mentions that the case was just a simple apology) and says how he knows she is tired from all the work she does so this gift will help her recover her energy.   She opens it and it’s some Pickle plums lol.   In his P.S. in the letter it says that he has nothing going on with Ruka …. She eats a plum and seems happy. 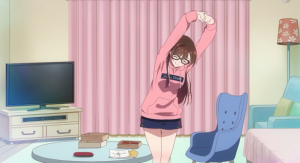 He is just freaking out after credits wondering if she has gotten the gift by now.

Then on the next episode teaser, We get another Mizuhara Memo and its basically Kazuya and Chizuru talking about gifts still and he mentions how he wants to give her his long defended V!!  And we learn that the next episode is titled Alcohol and Girlfriend.

Asylum rated it a 6

Love this show for real.

I’m sorry mami haters but she doesn’t do anything wrong. She actually seems to have his best interest at heart. I mean ruka arguably does but she’s too good for him. Mami is what he deserves. Change my mind.
P.S. Sumi is best girl though

I feel genuinely bad for Sumi

Chizuru -san is the best

kazuya is such a cute piece of trash, cannot say i hate him for being such a coward, it makes me sick… anyway he is really cute ^-^ mizuhara is totally above him just in maturity and personality, ruka is such a strong person i disgust that she paints herself so susceptible for kazuya, and sumi-chi omg she is so cute she deserve a lot she is the one improving the most, with kazutrash.
i love this dumb romcom with a trashy mc really trashy because he is stinky trash

The most hated/loved 50/50 main character ever

Ok but can she fkn talk??

Imagine how much less of a dumpster fire this show would be without mami? Like imagine bruh

This show is giving me cavities ♥️

I gaurantee he went back later on to rummaged thru Chizuru’s trash bags.

That’s not the power rangers that’s the Power F150s

Ruka-chan is not only top-tier, she knows how to deal with Kazuya and his nonsense. Sumi-chan is great and all but shes not a good match for him, prove me wrong.

Bro this is wayyyy to relatable

threw out the show Chizurus knees been red HMMMMMMMMM

seriously i really want kazuya to end up with ruka.