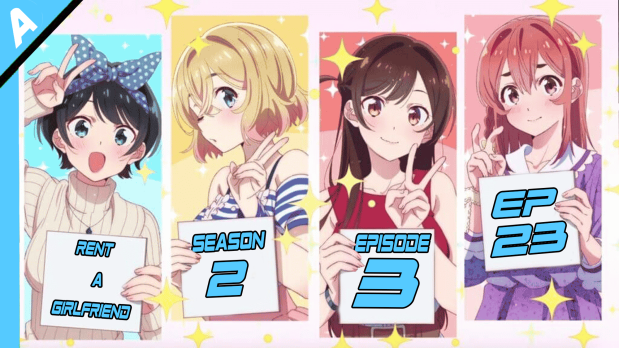 This episode picks up right where the last one left off, Chizuru is at Kazuya’s door saying that she lost her key.

One of my favorite parts is when Chizuru says do you mind and walks past Kazuya to go into his apartment. They just show him in utter shock his face is frozen in both fear and shock as they show Chizuru in the background kneeling down to take her shoes off.

A couple of things to point out, in the last episode I had said that when you live in an apartment you can just go ask the landlord to open your door, well they actually covered that by saying the landlord was away for the night. The second thing is the fact that we also said that she was probably going to comment on how messy his apartment was. AND she did, she says oh this place is messy as always.   Like bitch! You can leave then. 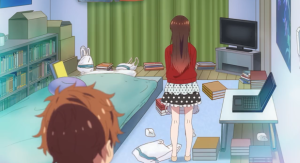 We see Kazuya having this massive internal battle with himself in his head, basically freaking out because he is thinking she will have to wind up spending the night. So in his head he is trying to figure out how he will ask her to do so.  Finally right as he’s going to say it he’s all stuttering and what not Chizuru opens the door to the balcony and he goes huh? The balcony??

Turns out that Chizuru wanted to check and see if she had locked her back door. Obviously she wants to go home and is trying to make sure there is absolutely no way for her to get inside her own house. This embarrasses Kazuya a little bit.. 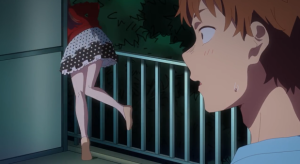 ON this balcony is where we see a couple of crazy things go down… As Chizuru is leaning over Kazuya’s balcony looking over into hers he notices that she is indeed in a skirt and he’s asking himself if it is even ok for him to be seeing this.  Not like he could really see anything anyways but pretty high up onto her legs were visible. Chizuru can’t quite see so she leans a little further over the balcony, in doing so she slips and almost falls over the balcony. Kazuya saves the day by grabbing her… But grabbing her where? On her ass of course….  This freaks both of them out! Chizuru is like HEY where do you think you are touching and he goes well you were about to fall over!! She’s like well you could have grabbed my hips not my ass, so he does so and honestly this looked worse to me! In all this chaos she manages to see the lock and says I can see so you can let go, he does and it’s too sudden she ends up falling back onto his balcony. 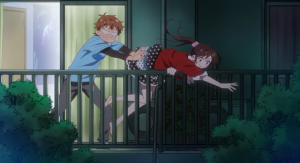 One way or another they wind up in a situation where they both fall and Kazuya is on top of Chizuru!  They wind up both face to face staring at each other! In shock! We basically see Kazuya pointing out how hot Chizuru is up close. (I thought we were potentially going to get a kiss scene here) I mean they did a full set up that seemed to be leading into that. (I was wrong)

What really shocked me here was the face that Chizuru did not freak out.  She just calmly said Get off. Then the doorbell rings!!!! 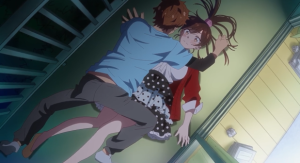 Kazuya checks the peep hole and notices that it is Mami! Before we fully dive into this I want to point out that we thought Mami was on some kind of weird stalker stuff and was watching Kazuya and Chizuru. I’m really shocked that they painted here sort of in a normal light here.  She just happened to be in the area and decided to stop by.  So Kazuya and Chizuru and inside the house freaking out!  whispering to each other, Chizuru is like why is Mami here! As they are in their whisper freak out, Mami starts to just open the door! Because Kazuya left it unlocked like an idiot!!!  So Kazuya pulls Chizuru into the kitchen so they can hide out of sight from the front door. They get in the kitchen and Chizuru is like MY SHOES MY SHOES! Because they were still by the front door..  (This whole whisper part had me laughing) Then the door opens! Mami just opens it and at the door ask if Kazuya is home all while he and Chizuru were hiding in the kitchen (this part had my anxiety high!) after some time she just leaves, Kazuya falls over in relief.  Then Chizuru is like ok ill go then She seemed a little upset that Mami showed up to Kazuyas house. Kazuya points out that she cant leave because Mami might still be in the area.  Remember Mami said she didn’t want Chizuru and Kazuya to be involved anymore. 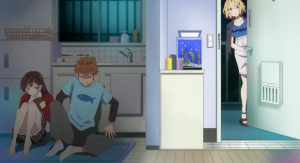 As Mami is walking away she is thinking where Kazuya could be, then in natural crazy fashion she remembers that she saw a purse on the floor of his apartment she didn’t really look mad over this  more crazy, her eyes went glossy as she just stared in the direction of the apartments. 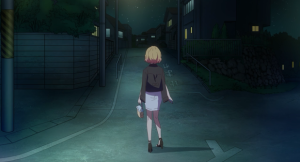 After all this Kazuya and Chizuru are just basically killing time waiting to make sure Mami isn’t in the area anymore and he says something that i don’t think is accurate.  He in his head ask why Chizuru went to his house in the first place rather than a friend or relative.  He says wouldn’t it be quicker for her to do either one of those, but like they literally live right next door to each other. A little more time passes and Chizuru goes to leave, she notices once outside that the apartment manager is actually back in the office which is good news for her meaning she can go home.   This next scene on the front balcony is where we wind up getting a ton of CD for Chizuru. 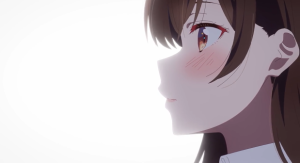 To try and give you an accurate version of what happened of this because it is about the entire back end of the episode, Kazuya remembers Chizuru’s grandma and all the stuff she told him about her.  So he tells her look if you ever need anything I’m here I’m your neighbor and friend. HERE we wind up learning that Chizuru has no parents her dad left and her mom died and her grandpa died shortly after that also. and she also has no friends all she has is her grandma. So maybe Kazuya saying this to her is special really deep down inside. We learn that she promised her grandpa that she would become an actress one day (hence why she is trying so hard at it) And she wants her grandma who is all she has left to see her on the silver screen. After all this she ask Kazuya if he is turned off (of course he isn’t) She finishes with “The girl you are paying to date is nothing special” just a struggling actress and a college student clinging to a childhood dream.

Kazuya tries to show her that he can relate by giving her his childhood story and deal he tells her how he has his parents and how even though he was ugly as a baby they still loved him basically saying opposite of what Chizuru just said moments ago, she ask him if he is bragging. Then he says no and explains how compared to Chizuru he has lived a carefree life because his future is basically set and how he will wind up taking over his family shop and he is ok with that. I suppose his message was suppose to be that it’s ok to just relax and be yourself but he did a really shitty job at trying to get this out to Chizuru. At the end of this conversation he says that he wants to be by her side because she is cool no matter what and she doing what she does turns it into something work related and says I cant turn anyone down that says they want to be by my side. Its my job. 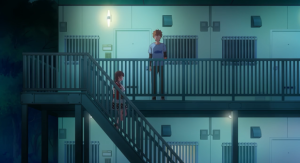 At the end of this balcony scene they make it seem like Kazuya and Chizuru didn’t speak for a while because when he sees her at school in the next scene she also sees him because apparently they both stop in the middle of the hallway, well she ends up opening one of her hands I guess to give him a low key hello, and this dude spazzes out over it. Dancing down the hall and everything.  BUTTTTT Mami was around the corner and she saw it all!!! 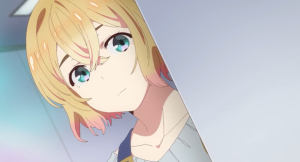 After the credit roll!

Then it shows Ruka letting us know that she will be in the next episode, apparently they will have a sleepover one thing I noticed is they are showing Ruka and her grocery shopping for food. For the sleepover I assume. They SHOW A CONDOM!!!! Is our boy gonna get it in???

Thomacus gave this episode an 8

Asylum gave it a 7

i reallllly wonder what that condom was for!

That ass grab tho!

Shit anime see you next week