Anime Limited have revealed their latest news and updates, with their current release schedule for the month of June and which titles will be available to pre-order.

The distributor has announced a select few that will be on offer throughout each Thursday of the month.

The collector’s edition Blu-ray release for Emma: A Victorian Romance Season 2 was previously mentioned in last month’s update and will be arriving a lot sooner than expected.

Retailing for £59.99 SRP, the set includes a rigid box, Blu-ray case and 44-page booklet. The discs are expected to be the same as the North American Nozomi release, and will include Japanese audio with English subtitles and Nozomi’s English dub which was kickstarted back in September 2018.

The second season aired in 2007 and was animated by studio Ajia-do Animation Works with Tsuneo Kobayashi as director, for a total of 12 episodes.

“In the faraway village of Haworth, a new chapter in Emma’s life has begun. Now employed by the wealthy Mölders family, Emma has resolved to put the past behind her. She’ll have to adjust to a new house, a charming (but eccentric) new mistress, and a host of fellow servants, some with buried pasts of their own.

Meanwhile, back in London, William is doing his best to uphold his father’s wishes as the Jones family heir, but try as he might, he can’t forget Emma. Yet, whenever he feels at his worst, Eleanor is always there to comfort him with a warm, shy smile. Could the answer to his broken heart be right before his eyes?”
Plot Synopsis via Anime Limited 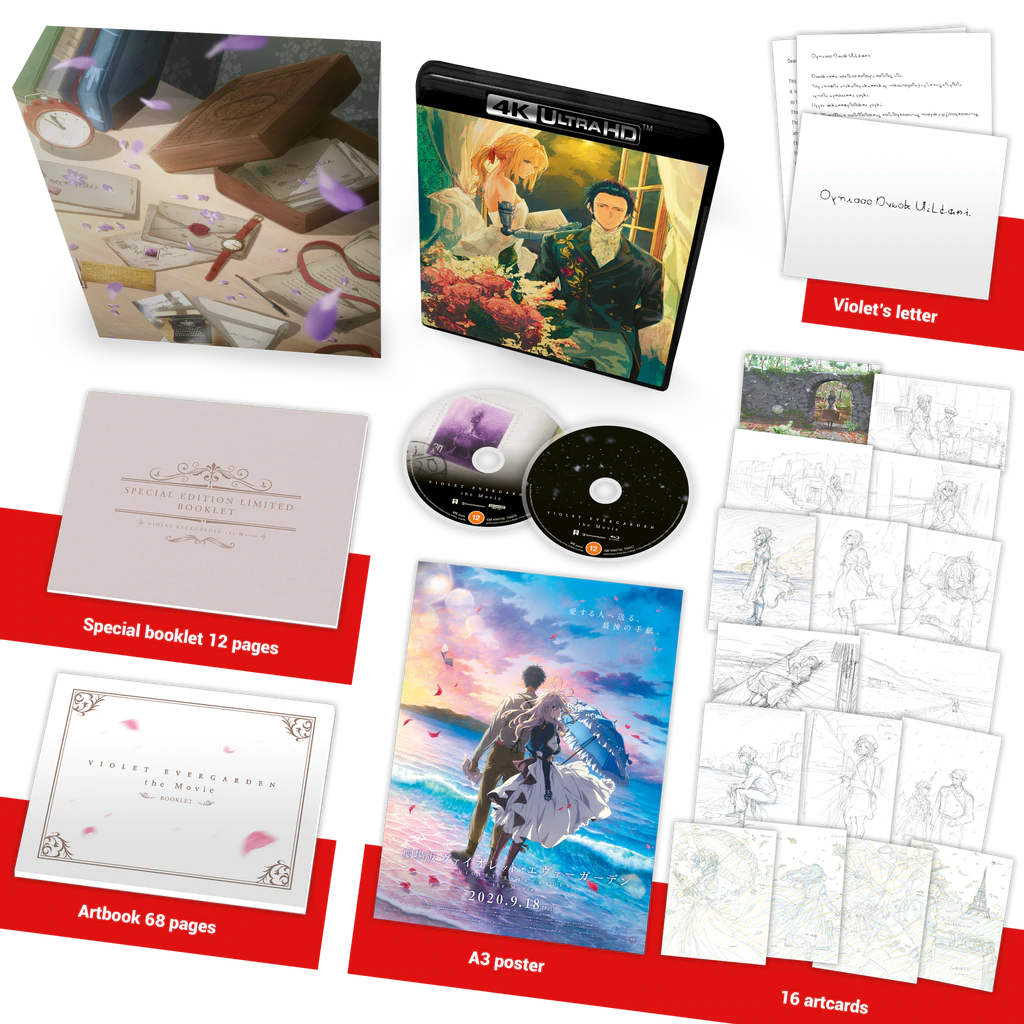 Retailing for £69.99 SRP, the set includes a rigid box, Ultra HD Blu-ray case and a number of physical items including a 68-page booklet, 12-page special booklet that discusses the Dolby Cinema presentation process, a replica of the Japanese theatrical poster in A3 format, 16 art cards and Violet’s letter translated into English.

As the film has yet to be released in other English-speaking regions, the discs are expected to be sorted by Anime Limited and one of the authoring companies they’ve collaborated with before. The film will include Japanese audio with English subtitles and the English dub.

“Violet Evergarden, a former child soldier turned “Auto Memory Doll” scribe, has made a name for herself writing letters that evoke the feelings her clients cannot, in pursuit of understanding the meaning behind the “I love you” spoken to her long ago. When a terminally ill boy asks her to fulfil one last request for his family, Violet must confront her own feelings of love, loss, and her past with the one who told her those cherished words in order to write one final letter.”
Plot Synopsis via Anime Limited 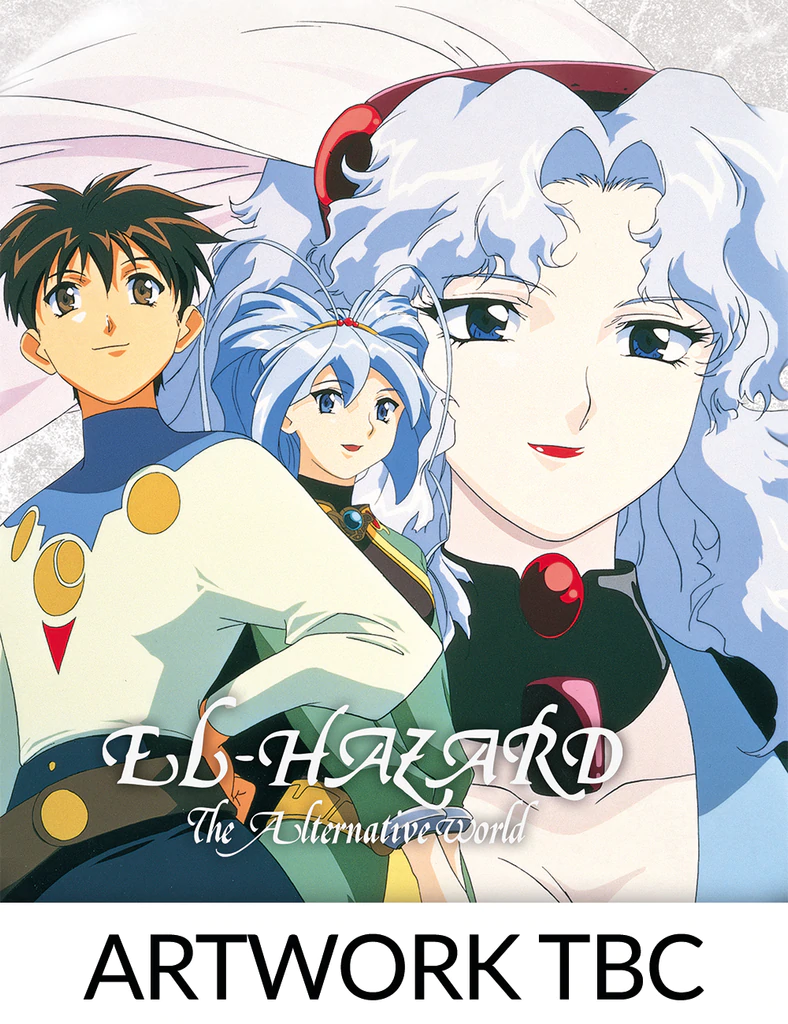 After releasing El-Hazard: The Magnificent World OVA series months ago, Anime Limited have acquired the UK rights to release El-Hazard: The Alternative World as a collector’s edition Blu-ray release.

Retailing for £59.99 SRP, the set includes a rigid box, Blu-ray case, 12-page booklet and 4 art cards. The discs will include Japanese audio with English subtitles and the classic English dub.

The series aired in 1998 and was animated by studio AIC with Yasuhito Kikuchi as director, for a total of 12 episodes and an OVA.

“A new Priestess of Water has arrived! Her name is Qawool Towles, and though she’s only 17, everyone (except for Shayla-Shayla) welcomes her with open arms. But during her initiation ceremony, a mysterious entity named Arjah appears and transports them all to an alternate world!

Now, Makoto and the others are stranded all over again in a strange new kingdom called Creteria. It’s a bleak, industrial realm ruled by a despot named Dall. If they ever want to make it back to El-Hazard, they’ll have to figure out the secret behind an ancient artifact called the Spring of Life. And they’d better do it fast, because the spring seems to be dying…”
Plot Synopsis via Anime Limited 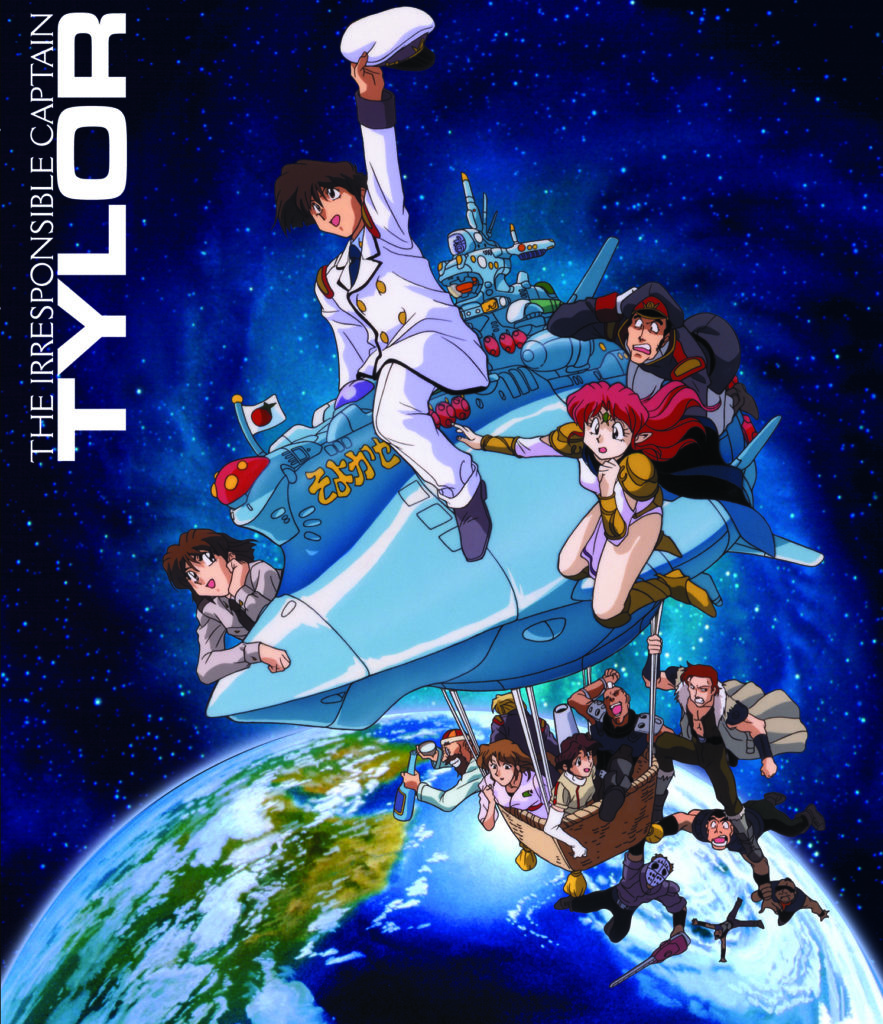 Keeping the Nozomi titles coming to the UK trend going, Anime Limited have also announced they have acquired the UK rights to release The Irresponsible Captain Tylor, both the 26 episode 1993 TV series and the 10 episode 1994 OVA series.

Details on what the UK release will provide in terms of the collector’s packaging has yet to be revealed, but the distributor has confirmed more information will be available at the end of June.

As of the time of this post, below is the current Anime Limited release schedule:

Also revealed in the newswire is another teaser for more Gundam coming to the UK, which is still taking its time, and the second half for Jujutsu Kaisen Season 1 is on its way.

The distributor and various cinema listings have also confirmed upcoming UK theatrical screenings for Pompo the Cinephile (which you can read more info from our recent post here) and The Deer King so keep an eye out for those at your local cinemas whenever possible.