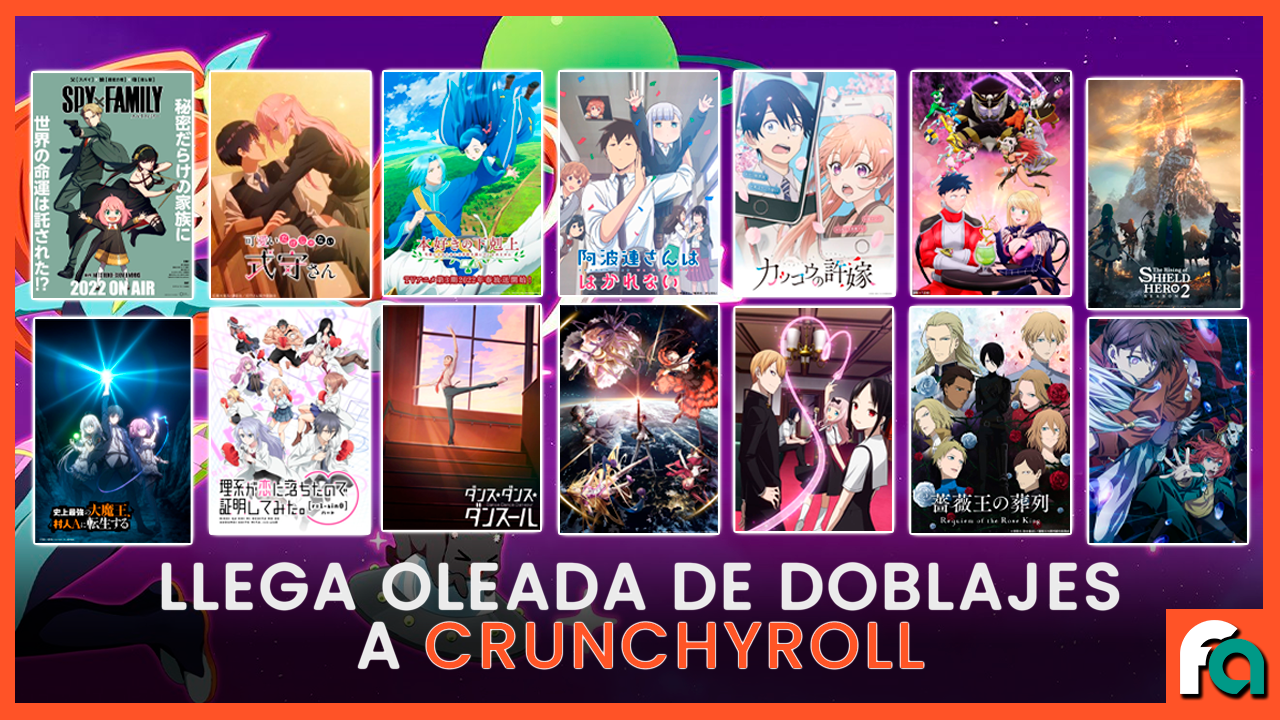 Crunchyroll announced its simuldubs for this Spring season

Crunchyroll announced its simuldubs for this Spring season

Through a press release, Crunchyroll announced its dubbing for this new anime season that is just beginning, these are:

A Couple of Cuckoos

Nagi Umino is a high school student who was exchanged with another family’s son when he was born; now she is finally going to meet her biological parents, but the day she is going to meet them she meets Erika Amano, a student at a high school / an institute for girls from good families. At the girl’s request, Nagi is half-forced to pretend to be her boyfriend in order to avoid an arranged marriage… However, what they didn’t know is that besides being false fiancés, they are the babies they exchanged at the time! be born! The parents of both families officially recognize their marriage with delight and the young couple begins to share their lives under the same roof. Nagi is in love with Hiro Segawa, a classmate, while Erika is determined to rebel against her father, so they can’t come to an agreement. A chaotic romantic comedy that is about to start!

Reina Aharen is an “indecipherable” girl, short and quiet, while Raido is the one who sits next to her in class. Aharen doesn’t quite understand personal boundaries, which makes Raido feel like there seems to be a lot of distance between them. Everything changes the day Raido picks up an eraser from the ground that Aharen had dropped and then that distance is reduced…drastically…too drastically.

Ascendance of a Bookworm (3rd season)

Motosu Urano was a college student and avid reader who died in an unfortunate and untimely accident. She had finally received the news that she would work between books as she had always dreamed of. When she came to her senses she was no longer herself, she had been reborn as Myne, the daughter of a low-income soldier. Her new home was the town of Ehrenfest, in a parallel world where an unquestioned class system gave absolute power to the nobles, who possessed the ability to use magic.

Junpei Murao has been fascinated by ballet since he was a child, but when his father dies in the second year of high school, he decides to forget that interest and become “more masculine”, so he decides to sign up for the martial art of Jeet Kune Do, which makes him very popular in his class. When a new student named Miyako Godai, whose mother owns a ballet studio, arrives in her class, the young woman quickly realizes Junpei’s love of ballet and invites him to practice with her.

Ordinary high school boy Shido discovers a mysterious girl at ground zero of a recent spacequake. Shido learns from his sister Kotori that the girl is one of the Spirits: mystical creatures responsible for spacequakes. Shido is recruited to help “seal” the spirits and end their threat to humanity. There’s only one problem: the only way to seal a spirit is to make it fall in love with you.

Kaguya is the daughter of a very important and millionaire family. Shirogane is also the son of a good family and the president of the council. They are both admired by everyone at Shuchiin Academy, and they are both in love with each other, but they won’t stoop to admit it, and they both try to get the other to declare their love first.

One spring day, an innocent young couple sit together in a field. Their names are Fudo Aikawa and Desumi Magahara… but they are actually “Red Gelato”, the leader of the superhero group Gelato 5, and “Reaper Princess”, a member of the evil secret organization Gekko! They’re supposed to be enemies, so the audience can’t know they’re dating, no matter what. All they can do is secretly see each other between fights. This spring day is just another day where they happily enjoy their time together, while the violent flames of battle blaze alongside them. This is the story of a hero of justice and an evil warrior who try to love each other without being seen!

Requiem of the Rose King

The Wars of the Roses grip medieval England as the Houses of York and Lancaster vie for the throne. Richard is the third son of the Duke of York, who plans to take the crown. Richard wants this to happen at any cost, but this innocent wish will plunge England further into the chaos of war. Meanwhile, Ricardo faces a much more personal battle.

Science Fell in Love, So I Tried to Prove it r=1-sinθ

What happens when a man and a woman completely focused on science fall in love with each other? Ayame Himuro is a smart science graduate who declares her love to Shinya Yukimura, another science graduate from her university. But of course, there is no scientific way to explain that what they feel is love! But as experts in science and engineering, not being able to scientifically prove what they feel would mean that what they feel is not real, so they will carry out a series of experiments with a single goal: to prove that love really exists.

Shikimori’s Not Just a Cutie

Shikimori seems to be the perfect girlfriend: cute, funny and sweet like no other… but she actually has a certain darker side that comes to light under certain circumstances. But that’s not a problem for Izumi, her boyfriend, who loves to see that partner side of her! A romantic comedy with a certain peculiarity.

Everyone has a part of themselves that they can’t show to others. In an era when nations around the world are locked in a fierce information war behind closed doors, Ostania and Westalis have been at a cold war for decades. The Westalis Intelligence Division (WISE) sends its top spy, “Twilight”, on a top-secret mission to monitor the movements of Donovan Desmond, who heads the Ostanian National Party for Unity, responsible for bombing peace efforts between both countries.

Chise Hatori, 15 years old. She lost, without hope and without family, they buy her for money. But the one who buys it is not someone else, but a non-human sorcerer named Elias. Although he hesitates at first, the young woman will begin a new life as her apprentice and future wife. She moves out and begins to live a new peaceful life, calm but firm, until one day she finds a Japanese illustrated book among the many that Angelica sends her from London. It is a book that she discovered in her young years, when she was still alone and helpless.

The Greatest Demon Lord is Reborn as a Typical Nobody

The most powerful Demon Lord in history, Varvatos, felt that he had already achieved all he could as a king. Because of how powerful he was, he had been left completely alone and longed for a simpler life. A few millennia later he is reborn as Ard Meteor, a simple villager, but in this future where he has been reborn, the magical civilization has suffered a great decline and magic has lost its power of old. Arc joins the Magic Academy with his childhood friend Ireena, and no matter how hard he tries, he can’t help but stand out and make it clear that he’s not just anyone.

The Rising of the Shield Hero (2nd season)

Iwatani Naofumi is the typical otaku, at least until one day he finds a book in the library that transports him to another world. There he will become the Hero of the Shield, one of the Four Cardinal Heroes, and will have to fight against the Waves of Catastrophe alongside the heroes of the sword, the spear and the bow. Excited at the prospect of a great adventure, Naofumi sets out on a journey with his group. However, after a few days they betray him and he loses his money, his dignity and the respect of those around him.

These dubbings do not yet have a release date, we will have that information soon.