Everything that will come in Geeked Week 2022 by Netflix

Everything that will come in Geeked Week 2022 by Netflix

Netflix you have everything ready to start the second edition of your Geek Week 2022 annual. For this year, the center of the geek universe belonging to Netflix is ​​going to celebrate in a big way!

For those who don’t know yet, the Geek Week is a free five-day virtual fan event celebrating Netflix-produced series, movies and games about fantastical worlds, taking place June 6-10 on all your favorite social networks. The biggest of streaming services has a ton of exclusive news, new trailers, talent appearances and much more in store for us. This is all you need to know so you don’t miss any details:

What news to expect and on what days?

Every day, the event promises to bring exciting news about our Netflix fantasy series, movies, and games, as well as exclusive previews, trailer premieres, surprise announcements, never-before-seen footage, cast interviews, script readings, and much more related to more. of 60 Netflix projects. There will even be a whole day dedicated to stranger things
Each day of Geeked Week will have a different theme:

(Umbrella Academy, The Sandman, resident Evil, one piece, Alice in Boreland, you enter other series and new upcoming seasons to be released)

(The Gray Man, The School For Good And Evil, spider-head, The Sea Beast, trollamong other films to be released)

(cyberpunk; Love, Death and Robots; Arcane; Inside Job; among other series and new seasons to be released)

What will be the exact dates and times for each part of the globe?

Geeked Week will take place from Monday, June 6 to Friday, June 10, as follows:

Who will participate in the event?

Netflix isn’t looking to spoil the surprises, but you can expect appearances from the cast and creative team of some of the shows and movies listed above. And, as announced, we’ll also have a fantastic group of presenters to help us break down all the scoops. They are:

To see the schedule for each day of Geeked Week in detail, you can review this poster delivered by Netflix to the media, along with a shocking trailer below. 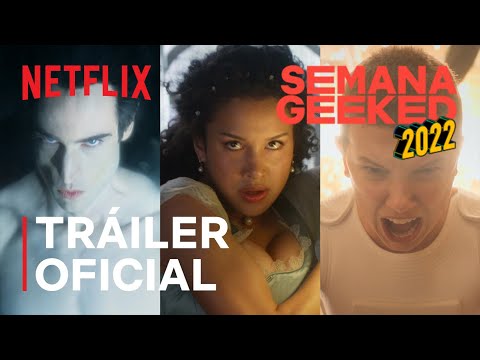