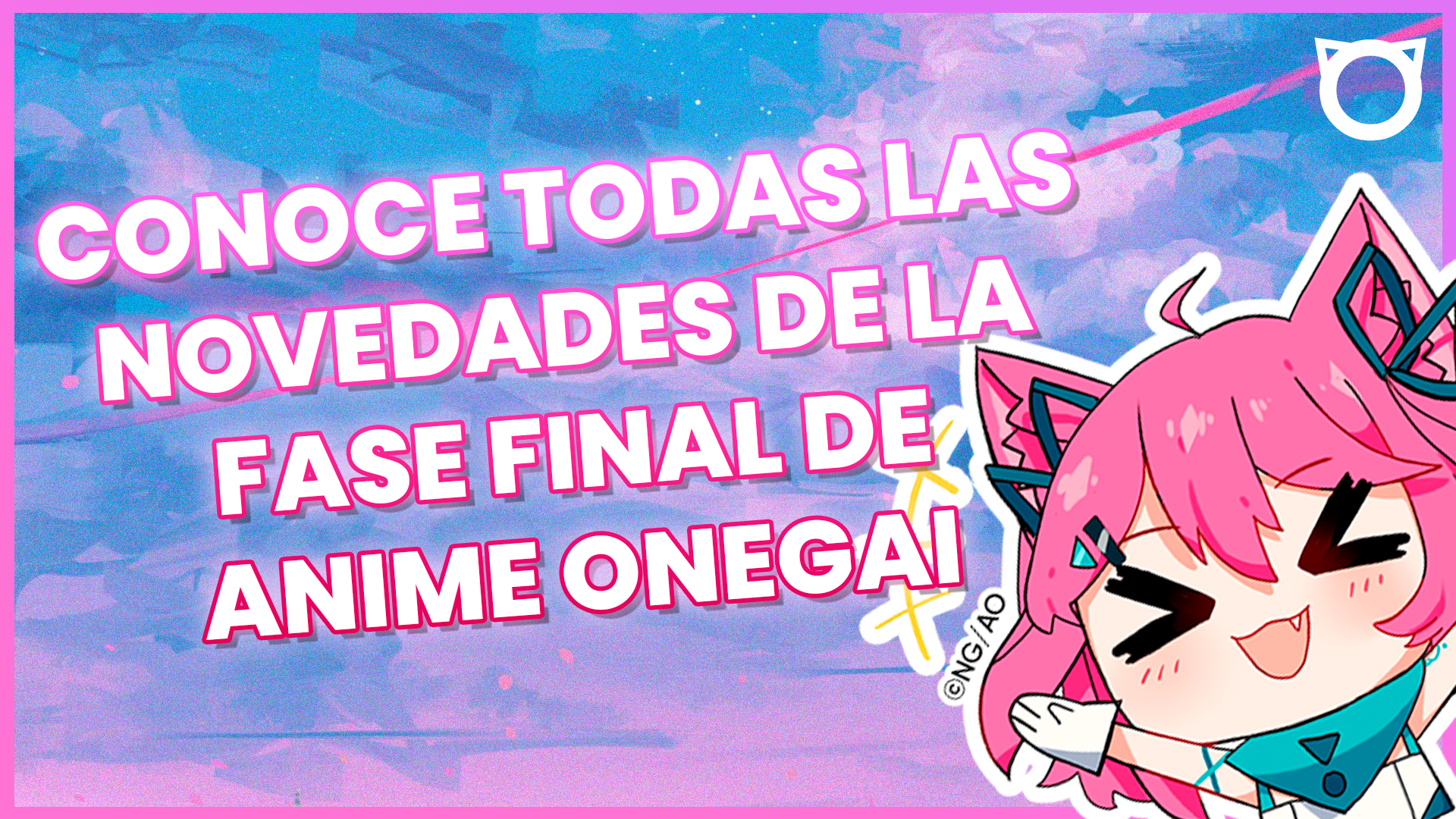 Know all the news of the final phase of Anime Onegai

Know all the news of the final phase of Anime Onegai

Announcement time! platform streaming Anime Onegai (now Anime Onegai by Animeka) its beta has ended and it has been officially launched, and with it they have revealed all the news that will arrive in this final phase, and here we share them with you.

To begin with, what was perhaps one of the biggest surprises of this final phase is the arrival of the television channel onegaiin which we can see anime 24 hoursand which will also broadcast the premieres of the platform before they are released on the platform.

Similarly, they have let us know that the platform’s mobile application will now be available at Android and iOS. In addition, the platform can now also be viewed through chrome cast on smart tvs.

On the other hand, and what perhaps most impatient and intrigued the fans waiting for the launch of said final phase, the premieres that will arrive on the platform with their respective Latin dubbing, which are:

On the continent of Cruzon, an impending war rages between the Kingdom of Krishna and the nation of Athens. The people of this land can use quartz for any purpose they wish. However, one person, Rygart Arrow, is not. He is an “anti-sorcerer”, a person unable to use quartz. But this feature will allow you to pilot an ancient Golem, one strong enough to fight against the invading army of Athens.

This dubbing comes under the direction of the talented David Allende

Haruka Nanami, an aspiring songwriter from the countryside, longs to write music for her beloved idol, Hayato Ichinose. Determined to achieve this goal, she enrolls in Saotome Academy, a highly regarded vocational school for the performing arts.

Upon arrival, Haruka soon learns that all of the staff, including the director, are either idols, songwriters, or poets. To top it off, she is surrounded by incredibly talented future idols and songwriters, and the competition between the students is fierce; with the possibility of being recruited by the Shining Agency upon graduation, the stakes are high. As he strives to achieve his dream at the academy, one fateful night, a series of events lead Haruka to a mysterious man standing in the moonlight, and he seems a bit familiar…

This dubbing comes under the direction of the talented Ale Delint, and among its cast we find the voices of Ferso Velázquez, Ivan Bastidas and Pamela Sousa.

Mage Association members Rin Toosaka and Luviagelita “Luvia” Edelfelt are tasked with finding and recovering seven Class Cards, medieval artifacts that contain the life essence of legendary Heroic Spirits. To help them on their quest, they are given the power of Ruby and Sapphire, two sentient Kaleidosticks that would allow them to transform into magical girls and drastically increase their abilities. However, the two wizards are on anything but good terms, prompting the Kaleidosticks to abandon them in search of new masters. They run into two young schoolgirls, Illyasviel von Einzbern and Miyu, and quickly convince them to form a contract. With their new powers and responsibilities, Illya and Miyu set out to collect all the Class Cards.

This dubbing comes under the direction of the talented David Allende.

On the surface, the idea of ​​Kyouko Hori and Izumi Miyamura getting along would be the last thing on people’s minds. After all, Hori has a perfect combination of beauty and intelligence, while Miyamura appears meek and aloof to her classmates. However, a fateful encounter between the two exposes their hidden identity. Although she is popular at school, Hori has little time to socialize with her friends due to housework. On the other hand, Miyamura lives under the noses of her classmates, her body has secret tattoos and piercings that make her look like a gentle delinquent.

Opposite personalities but sharing uncanny similarities, the two quickly become friends, often spending time together at Hori’s house. When they both emerge from their shells, they share a side of themselves hidden from the outside world.

This dubbing comes under the direction of the talented Ana Liz Sánchez, and among its cast we find the voices of Javier Olgín, Gina Sánchez and Marysol Lobo.

Second season of Hyakka Ryoran: Samurai Girls. Several months after the battle against Gisen, several dark samurai are resurrected to fight the protagonists. Meanwhile, the girls fight over who should be Muneakira’s girlfriend.

This dubbing comes under the direction of the talented David Allende and will premiere next Wednesday, April 20.

When Tomo Yamanobe’s father, the former director of the Saint Mikhailov Academy, disappeared, he left nothing behind except a piece of art called an “icon”. Shortly after his disappearance, rumors began to spread that a serial killer was targeting female students at the academy.

As Tomo and his sister Mafuyu Oribe return home after being tormented at school, Tomo stumbles across an injured silver-haired boy who abruptly disappears while being tended to. Mafuyu goes to find it, only to find that the church holding the icon is on fire. As she tries to save the painting, the would-be serial killer suddenly attacks her with a mysterious ability to control magnesium. Appearing out of nowhere, the silver-haired boy, who can control iron, rescues Mafuyu.

Mafuyu discovers that the child, named Alexander Nikolaevich “Sasha” Hell, is a “qwaser”, a being that is capable of controlling an element through the power of “soma”, received through the act of nursing. Confused by the ordeal, Mafuyu tries to get over it with little luck as Sasha transfers into his class the next day. What will become of Tomo and Mafuyu’s normal school life with the danger of other qwasers approaching them?

This dub comes under the direction of the talented Ale Delint and will premiere today, April 18.

Youto Yokodera wants to be seen differently from most men: as a pervert. However, his lewd actions are often misunderstood as good intentions and people fail to see his true nature. Hearing rumors of a cat statue that can banish an unwanted trait, he seeks it out and prays that its facade be removed. But every wish comes at a price: those unwanted features are transferred to someone else who wants them!

After realizing that vocalizing his dirty thoughts isn’t for the best, Youto decides to regain his lost traits by searching for the person who received them. Unfortunately, he wasn’t just praying to the cat statue, and now he must fix not only his life, but also the lives of others.

This dubbing comes under the direction of the talented Ale Delint.

It cannot be said lightly: Tsunayoshi Sawada is simply no good. He is clumsy, talentless, and desperately in love with school idol Kyouko Sasagawa, a girl completely out of his league. Nicknamed “Loser Tsuna” by his classmates, he seems to be the very personification of failure disguised as a high school student.

Tsuna’s boring life takes an extraordinary turn when he meets the mysterious Reborn, who turns out to be a hit man…and surprisingly, a baby! Sent by the strongest mafia family in Italy, Reborn is assigned the daunting mission of grooming the bored high school student to succeed the ninth boss of the notorious Vongola family, who is on the verge of retirement. The boring boy has a grueling road ahead of him, but with the help of his new criminal affiliates and his quirky tutor at home, maybe even Loser Tsuna can achieve greatness.

This dubbing comes under the direction of the talented Óscar López and among its cast we find the voices of Erika Langarica, Diego Becerril, Manuel Campuzano.

Two years ago, Mitsuki Kouyama’s friend Eichi Sakurai moved to America before he could confess his feelings to her. Although she cannot contact him, they made a promise to fulfill their respective dreams: Mitsuki wants to become a professional singer and Eichi an astronomer. She hopes that one day her music will reach the whole world with a brightness like that of the full moon.

There’s only one problem: Mitsuki is suffering from throat cancer, which makes her voice low and her singing strenuous. Her grandmother, who hates music, insists that Mitsuki have surgery to remove the cancer, but she refuses due to the risk of losing her voice. One day, two shinigami, Meroko Yui and Takuto Kira, appear to tell her that she only has one year to live. This sudden revelation causes Mitsuki to spring into action and she decides that she, with the help of Meroko and Takuto, will become a professional singer in the time she has left.

This dubbing comes under the direction of the talented Monstserrat Aguilar and like most of the series from our childhood, it will have openings and endings dubbed into Spanish, as well as actors from other states.

On the other hand, these have also revealed what the plans will be that the platform will bring and you can see them below:

Finally, it is worth mentioning that after the presentation of all these new releases, the family of Anime Onegai shared what will be the premiere schedule for this week on the platform and here we leave it:

Needless to mention, it was also announced that those who were registered on the platform until the end of the beta will have 14 days free with all the options offered by this final phase.